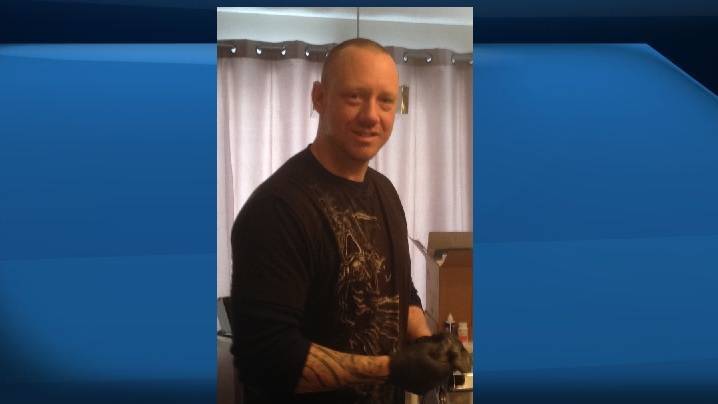 The family of a man injured in last week’s explosion at a Nisku welding company said he is staying in positive spirits despite his serious, life-altering injuries.

Eric Fabbro, 42, was one of two men taken to hospital after a blast at Ja-Co Welding and Consulting on Thursday morning; Alberta Health Services said that day that the other injured man was in stable condition. A third man in his 40s died at the scene.

Wife Nicole Fabbro said she learned about the explosion when she got a call from the hospital and fell to the floor when she found out Eric was injured.

“Scared, just scared. Lost,” she said when asked what went through her head.

“He’s my backbone. He’s my best friend. From the day we met, we were soulmates. You pack a lunch for your husband. He goes to work like he has for the past 15 years and this [happens]. The first thing is I want to know what happened.”

Nicole and Eric’s parents, who were visiting for the holidays, rushed to the hospital. It isn’t clear what caused the blast, but Nicole said Eric has some recollection of the moments afterward.

“He said he was covered in shrapnel. Everybody was running over him. Finally he smelled flames and he tried to get help so he was calling for help,” Nicole said.

“He crawled out because his legs were screwed so he called out and two young boys ran back in and got him.”

The family said Eric has had one surgery and is expected to undergo several more.

“He’s got a very, very deep gash right there,” Nicole said pointing to her lower leg.

“You can see the bone. The [gash] right here [on the thigh]… all his nerves are exposed. His muscles look like hamburger.”

Nicole said Eric also has a “huge” burn down his neck, arm and torso along with a broken nose and whip marks on his back from being hit by wires.

Even in the face of such serious injuries, Nicole said Eric is staying optimistic.

“Eric is a positive person. He’s very positive. Myself, I’ve had a very hard life – he’s been my backbone,” she said.

“He’s constantly thinking of other people. He’s laying there and he’s in so much pain… with his nerves exposed. It was so hard to see somebody in that much pain and awake,” French said.

The explosion is latest in a series of difficult moments for the married couple of 15 years. Nicole is on disability, unable to work and does not drive; the couple also had difficult financial times after the economic downturn.

Nicole said the couple, who lived in B.C., lost “everything” before moving to Alberta to find work. Eric, who was a diver before retraining as a welder, began working at Ja-Co in 2014.

“We were just starting to get caught up from him losing his job. It sucks,” Nicole said.

With Eric the sole breadwinner of the household, Nicole has concerns about the couple’s financial future.

“He does everything for me. He does the grocery shopping. He pays the bills,” Nicole said.

“I don’t know where we are going to go from here.”

There’s no timeline for how long Eric will be in the hospital and it’s expected that he will have a long road to recovery. Family members have started a GoFundMe page to financially help the couple — Eric is off work indefinitely.

“Getting him walking, getting him rehabilitated is going to be a really long process,” French said.

“I just want to help them in any way I can. Will they have to pay for things? Getting his house ready for him to come back.”

“Just having money there so when we have new obstacles to overcome, that that’s not their worry. We can say, ‘Okay, we need to make a ramp. We need to set up the main floor into a living space for him for a while,’” she said.

French said the family will persevere through this situation and she herself is trying to mirror her uncle’s positivity.

“I’ve learned in my own grief the last year of losing my son that that energy — I can put it somewhere else,” French said.

“Like Eric, I need to stay positive for Nicole and not go down that path, just keep having faith everything is going to work out.”

Alberta Occupational Health and Safety is investigating the explosion. The GoFundMe page can be accessed through this link.