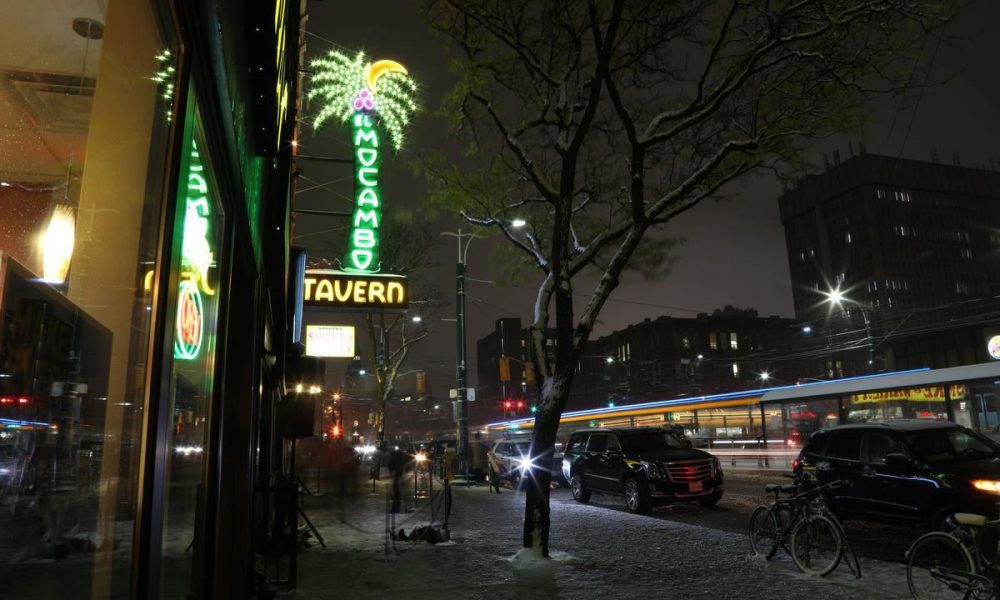 On Thursday night on Spadina Avenue, the velvet ropes were set up on the sidewalk just south of College, and a crowd of people had started to form in clusters of three or four. A steady parade of Cadillac Escalades and Porsche Carrerras pulled to the curb — and some Honda Civics and a Dodge Grand Caravan too — to drop off women in short sparkly skirts and men in cowboy boots and velvet jackets.

Speakers set up on the sidewalk played a 35-year-old U2 song. “I saw them here!” one woman said.

Another man, with a woman and young child, was walking by and asked who was playing tonight. “No one’s playing,” he was told. They were just planning to relight the neon sign.

“Ah,” he said, smiling and nodding that it was an obvious enough reason for the buzz. Then he said, to his own child as much as to the stranger in front of him, “This is a legendary music venue, The El Mocambo.”

The music historian Nicholas Jennings posted on Facebook this week that the first band to play at the El Mocambo when it opened on March 23, 1948 was a “light jazz combo” called the Ambassador’s Trio. He posted early ads for the bar when it was billed as “a bit of Mexico in Toronto,” a bill from the late 1950s featuring an all-girls singing group called “The Coquettes Quartet” and a “Big Irish Night” lineup from 1965.

The new façade of the under-renovation venue says “Keeping live alive since 1948,” and clearly the history goes way back. The legend most Torontonians under about age 80 are more familiar with is a bit more rock ’n’ roll. This is the place the Rolling Stones recorded a live album — not just them, but Elvis Costello, Stevie Ray Vaughan, April Wine. The Ramones played here. Tom Waits. And U2, like the lady says.

In the 1980s and 1990s, it was also a place a where your buddy from English class might have a gig with his punk band. And the night after you saw him, you might see the hottest local indie act. There was something special in exactly that mix: it hosted legends, yes, but was also home to local scenesters and wannabes and never-weres.

It was shuttered in 2014, a broke bar in a broken down building that was going to become a computer store or something. But Eccentric Billionaire Michael Wekerle bought it, promising to restore it to its former glory.

Four years later, it isn’t ready to reopen yet. But the sign is back.

We love our old signs in this city. I’m old enough to remember the outcry when it briefly seemed Fairmont was planning to take the words “Royal York” off the front of the then-skyline-defining hotel. We have a connection to the neon and the bulbs that spell out our memories of the places that have defined our neighbourhoods.

Lately there’s been a trend to save signs from the trash bin: I reported live from the dismantling of the thousands-of-points-of-lightbulbs at Honest Ed’s, to be reinstalled later on a different building. I wrote about the relighting of the Sam The Record Man spinning discs in January this year, now high above Dundas Square.

But this one is special: The palm tree spelling out EL MOCAMBO in yellow neon along its trunk, the flashing white leaves surrounding purple coconuts and a crescent-moon that may be a banana.

It’s special because of that legendary history. And because it’s actually back here in its original spot at 464 Spadina. But mostly because its restoration and reinstallation anticipates the reopening of the El Mo, renovated and soundproofed and ready to rock again, sometime next spring.

The crowd on the street Thursday night had swelled to more than a hundred as the falling snow accumulated. Everyone laughed when a car collided with a parked police car at the curb. Then, shortly after 7 p.m., Eccentric Billionaire Michael Wekerle himself appeared behind the velvet ropes, wearing a green fur coat and pink gloves and sunglasses. He was bouncing up on the balls of his feet and beaming, shaking hands with the crowd and shouting about how great it all was. He pointed and called out to people in the crowd — “Andy Kim!” — and called the boxer George Chuvalo up to stand next to him. And then, speaking a mile a minute into the microphone, he promised a new great beginning for Canadian music artists, and then introduced the mayor.

“Thank you,” John Tory said to his host, and to the crowd. “If Michael Wekerle hadn’t had the determination, and frankly the money, we wouldn’t be here,” he said. Music is important, he said, bringing people together in a city where they may not share the same language, but can dance to the same beat. “Here’s to the El Mo,” he said, “and to many years of success.”

Then the crowd there on the street counted down from 10, as if it were New Year’s Eve. When they reached one, they all shouted “El Mo!” and the lights came on, purple and green and yellow and white. The familiar opening guitar chords of the Rolling Stones “Start Me Up” came through the speakers. Everyone cheered, many took photos.

A few in the crowd even started dancing in the snow, while others began to make their way around the corner to a private party being held in a back alley to celebrate. A man in a parka and toque smiled and jumped in the air, and shouted. “Rock and roll, baby!”