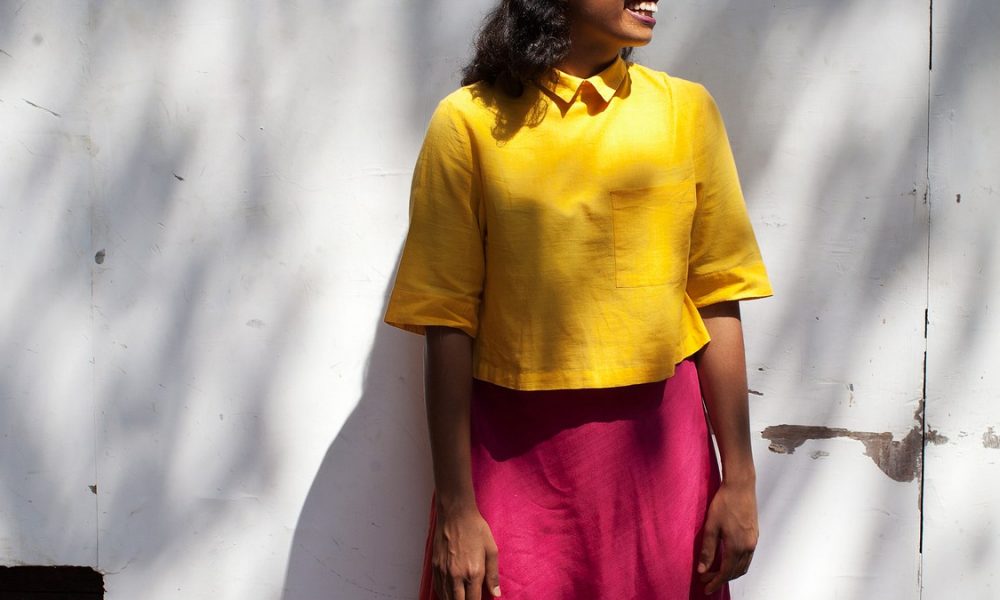 Sana Javeri Kadri distinctly remembers the first time she tried a turmeric latte in the U.S. It was the summer of 2016, she was commuting to her old job in marketing at San Francisco’s Bi-Rite Creamery, and she spotted it on the menu at a local café. “It was disgusting,” she recalls. “They used way too much turmeric. They had added it to make the drink bright yellow without giving any thought to making it delicious.” She threw the latte in the trash.

“I dismissed the turmeric trend as silly,” she says now, sitting in the living room of her pastel-colored house in Oakland, surrounded by clear encyclopedia-size bags of the vibrantly hued spice. “I was like, ‘This is going to go away really quickly.’” But it didn’t. Soon enough turmeric was on countless coffee shop menus and in the pages of glossy food magazines, praised as a miracle spice for its nutritional benefits. “I realized that, clearly, something was happening,” she says.

Sana Javeri Kadri, a 25-year-old Mumbai native with bouncy blackish-brown curls and a bubbly voice, is the founder of spice company Diaspora Co. Her house, which she shares with her girlfriend, Rosie Russell, and their rescue dog, Lily, doubled as the headquarters of the business at the time of my visit and, thanks to all that turmeric, smells perennially of earth.

It’s a sunny, cloudless morning, and Javeri Kadri offers me something to drink. She quickly clarifies that she doesn’t do turmeric lattes. “I have never made one in my life,” she says proudly. This is because, like many Indians, she associates the combination of turmeric and milk—also known as haldi doodh—with sick days.

Instead, she sets about whisking matcha and water in a small bowl, pouring it into two glasses lined with maple syrup and adding rice milk and ice. It’s delicious, like a pot of melted green tea ice cream. While I sip, I ask Javeri Kadri how business is going. She tells me that when the company launched online in August 2017 with essentially no advance marketing, all the turmeric sold out in three hours. The irony here is palpable: The very drink that Javeri Kadri refuses to make, that she hated so much when she tried it back in 2016, made her business wildly successful from the start.

Long before Diaspora Co., Javeri Kadri had been interested in the single-origin food movement—companies that responsibly source ingredients, like, say, coffee or cacao, from a particular grower. “I saw how these people were taking a crop where there is injustice and a lack of transparency and solving a problem,” she says.

In India, many aspects of the food industry have been similarly whitewashed—particularly the spice trade, which relied on enslaved people to grow, harvest, and transport goods during European colonization 200 or so years ago. “It was completely scrubbed out of Westerners’ consciousness that you should care about your spices and where they come from,” Javeri Kadri says. “It was to the benefit of colonizers to not say that this comes from slave labor.” While colonization is long gone, a similar supply chain persists. The vast majority of the money from spice cultivation goes into the hands of corporate food companies and various middle men (auctioneers, processors, wholesalers), while farmers in India aren’t fairly compensated.

As she watched the popularity of turmeric grow throughout 2016, Javeri Kadri asked a few owners of American spice companies if they knew exactly where their product was coming from, but no one was able to give her a precise answer. So in early 2017 she moved back to Mumbai and visited the Indian Institute of Spices Research in Kozhikode, Kerala. What she found was that the most popular varietal of turmeric sold in the U.S.—Alleppey turmeric—wasn’t actually a varietal at all. It was the name of a vacation destination in southern India favored by Europeans during colonization. “They decided that all turmeric that met a [certain shade] and size would be Alleppey turmeric,” Javeri Kadri explains. “Any indigenous knowledge of local varietals and nuances had more or less been stamped out.”

Meanwhile, the Indian Institute of Spices Research had been seed-saving scientific varietals of turmeric that were aromatic, brightly colored, high yielding, and high in curcumen—the ingredient that gives the spice its anti-inflammatory and antioxidant properties. But those varietals didn’t exist on the commercial market. So Javeri Kadri decided she would work directly with Indian farmers—eliminating all of the middle agents—and export these turmeric varieties herself.

Getting the business set up was not easy, even for an India native like Javeri Kadri, who speaks Hindi, Gujarati, and Marathi. She had to file unending paperwork with the Spices Board of India, spend months going back and forth with farmers to understand the cultivation process, and educate herself on the complex Indian laws governing exporting spices.

Javeri Kadri also had to contend with being a queer woman in a country where women are still not afforded equal rights as men, and gay sex was illegal until this September. “These farmers have never seen anybody like me,” she says, and many of her partners in India tell her that she is the first woman they have ever done business with. She also hasn’t directly come out to any of her Indian colleagues for fear that it would jeopardize her fledgling business.

Diaspora Co. now has two full-time and four part-time employees and primarily sells pragati turmeric, an heirloom varietal with a high curcumen content. You’ll find the modern, playful pink packaging everywhere from Third Culture Bakery in Berkeley to the sleek Indian all-day café Pondicheri, which has locations in Houston and New York and sells T-shirts that say “Keep Calm and Curry On.” Twenty percent of her business is selling to these restaurants and shops, while the other 80 percent comes from her online store.

She just published Diaspora Co.’s first zine, Cooking with Gold, which includes recipes for coffee with turmeric and ghee and “millennial face gunk” (a turmeric-based scrub that Javeri Kadri swears by). She sells Diaspora Co. tote bags, whose bright color is an exact match with the turmeric (“You don’t even want to know how much effort went into making that happen,” she says). Of her approach to branding, she says: “I was adamant about saying that I am not a woo-woo wellness Ayurvedic yoga instructor selling you turmeric. I am a queer woman of color who is a supply-chain nerd selling you turmeric.”

Back at Diaspora HQ, finished with her iced matcha, Javeri Kadri wanders into her small kitchen to make us some eggs fried in ghee. She lays the sizzled eggs over a leftover batch of pinto beans and ham hocks and sits down to eat. She loves cooking in this hybridized, not-strictly-Indian way.

That said, she has complicated feelings about the way in which turmeric has suffused mainstream American cuisine, from wellness tonics to soups to salad dressings, and how health junkies are treating the spice like a new discovery. “I wish I could show you the messages I get from women who tell me how their chakras are in sync and Ayurveda has saved their soul,” she says with a sigh. And despite the fact that the coffee shops she sells to keep offering her turmeric lattes, she hasn’t changed her mind about the drink.

On the other hand, Javeri Kadri reasons, “If people are paying a premium for my turmeric so I can pay the farmers the best price possible, I don’t really care what they do with it.” Eventually Javeri Kadri wants to build a sustainable supply chain that can be applied to other spices, like cardamom and cumin, and then to crops like rice. Colonialism ruled India for so many years, she says. “We just don’t know how to separate ourselves from that.”

But food, Javeri Kadri believes, can be a powerful means of changing this mentality. “It’s world domination, our way.” 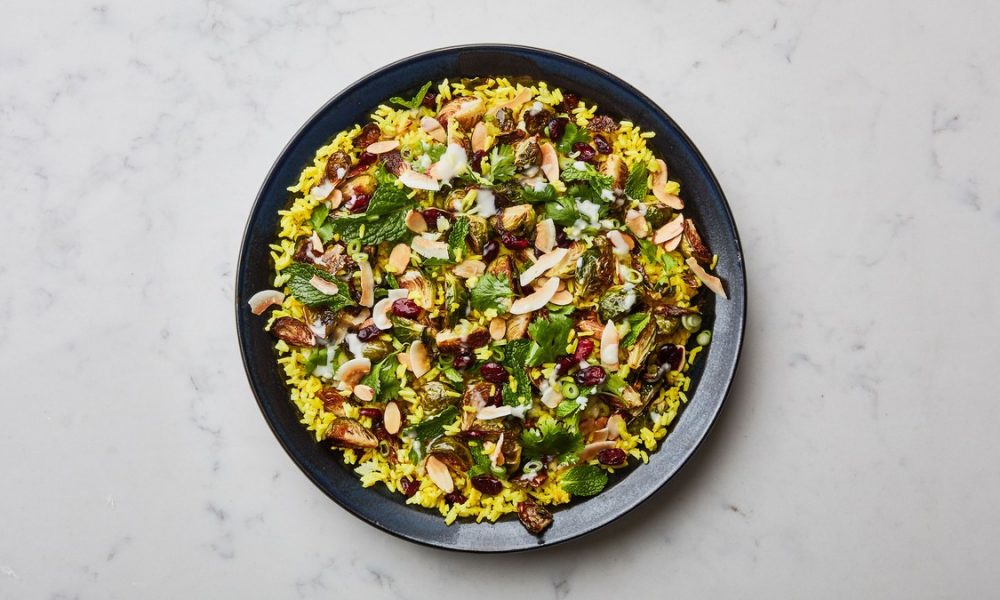 Quarter brussels sprouts, reserving any leaves that fall off. Transfer sprouts and leaves to a large rimmed baking sheet and toss with 2 Tbsp. oil. Season with salt and toss again. Roast brussels sprouts until deep golden brown, tender in the center, and crisp around the edges, about 25 minutes.