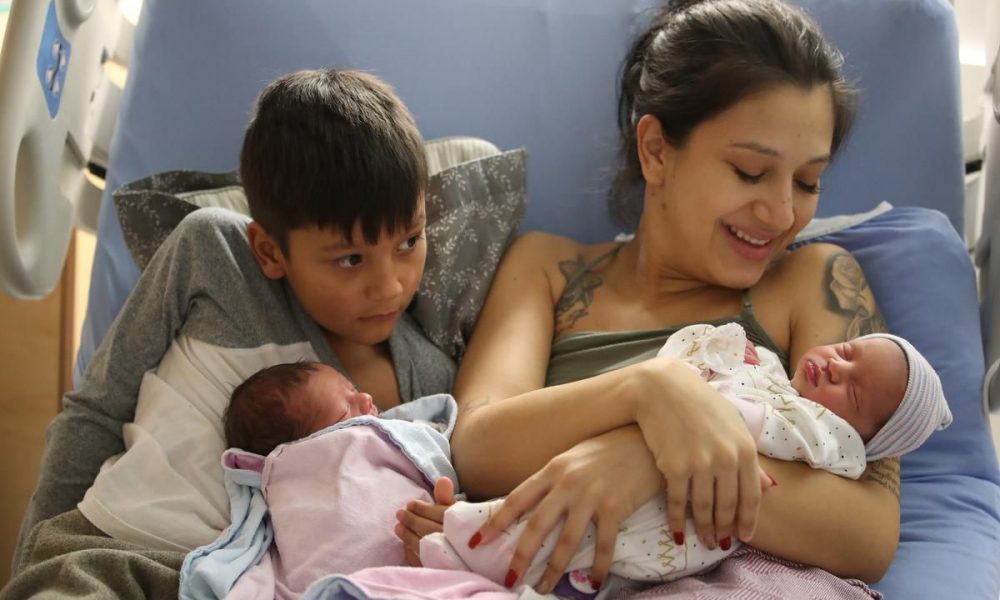 When Melissa Arrubla saw her twin boy quickly coming into the world, the Toronto woman knew she wouldn’t be delivering her babies in a hospital.

Crouching beside a bench in the lobby of her parents’ apartment building on Dixon Rd., she had her younger brother call their mother waiting in the driveway, who had dashed out minutes ago to pick up the family van. With the boy’s cord still attached, they all panicked when the twin girl emerged, legs first.

“Call 911!” Arrubla yelled at her mother, Liliana, who was trying to catch the baby while she also tried to get through to the emergency services.

That commotion set the scene of the family’s memorable New Year’s Day as they ushered in little Elian at 5:03 a.m. and Elena, who arrived 12 minutes later.

“We started our new year with a bang,” Arrubla said with a chuckle while resting in her bed at Etobicoke General Hospital. “What happened was surreal, but I’m glad we’re here and everyone is okay.

Arrubla had just visited the hospital in the evening of Dec. 31 for a final cervical gel treatment and had celebrated New Year’s Eve with a McDonald’s meal before she was to return at 8:30 a.m. the next day to deliver the twins through induced labour.

She and her mother had set the alarm on their cell phones for 6:30 a.m., but, by the time the alarms went off, Arrubla had already delivered.

Arrubla said she started feeling consistent pains around 4:30 a.m. on New Year’s Day and immediatley woke up her mother, realizing the twins simply couldn’t wait for another four hours.

“We knew we got to go. We didn’t even have time to grab our jackets,” recalled Arrubla, 28, who left home with just a thin blue sweater, striped pyjama pants and pink flats. “I could feel the head of the baby coming out and I told Junior to get mom right away.”

With her Honda Odyssey outside still running, Liliana rushed into the lobby and looked in horror at Elian’s head emerging from under her daughter, who was bending over with her legs apart.

“Her pants were pulled down and I saw the head of the baby,” said the still-emotional grandmother. “I just grabbed the baby inside her pants and started rubbing his head to make sure he’s breathing. He had blood all over and was slimey and slippery. I told my son to get my husband to bring us towels and blankets to keep the baby warm.”

With one arm holding the baby boy — still with his umbilical cord attached to the mother, Liliana spoke to the dispatcher while waiting for the ambulance to arrive.

“My daughter is having twins and we are in the lobby,” the 49-year-old grandmother remembered telling the dispatcher. “We have no scissors, nothing to cut the cord.”

With the help of her son and husband, Liliana sat Arrubla down beside the bench while she tried to calm everyone’s nerves.

Then they saw Elena’s tiny feet and her legs emerging from under Arrubla.

“Elena was half way out. She wasn’t showing her arms and we were afraid to do anything in case she got her cord around her neck. I told Melissa don’t push no more. We didn’t know what to do and must wait for the paramedics,” said Liliana, still shaken. “The paramedics arrived within five, six minutes, but that felt an eternity for us.”

Three ambulances and one fire truck showed up and took over. One pair of paramedics attended Elian as the other pair tried to rescue Elena who was still stuck.

Jesse McArthur, one of four paramedics attending the call, said time is crucial in delivering a breech birth.

“It’s the kind of scenario that we are trained for, but they don’t happen often. The fact that we had a breech baby upped the urgency of the call,” said McArthur, who arrived with his partner, Ross Thomas, minutes after the call and had not been involved in a delivery in his five-and-a-half years’ experience as a paramedic.

“This was unique, because we were not delivering a baby in our truck or at home, but in the lobby of an apartment building. This was far from what we had expected at 5 a.m. on New Year’s day.”

McArthur credited his two colleagues, Sara Richard and Lyndsay Piper, who safely delivered the breech birth, as well as Arrubla’s mother for keeping everyone’s nerves in check. When Elena finally came into the world, the paramedics passed Liliana the scissors to cut the baby girl’s cord.

“That was so perfect. Everything was so beautiful,” said Liliana, looking at her granddaughter as she held her at the hospital.

On her way to hospital with her twins, Arrubla called and broke the news of the births to her husband, Sebastian Cuartas, a welder. He was at work and supposed to meet her at the hospital at 8 a.m. for the planned induced delivery. “He’s had twins on his side of the family and he was just overwhelmed,” Arrubla said.

Elena, who was born 6 pounds 5 ounces, was put on a respirator for oxygen briefly and her brother, 6 pounds 8 ounces, had to stay in hospital for treatment of his high red blood cell count. Despite the commotion, the family did manage to track down the twins’ times of birth through cell phone records to one another and the authorities.

Both Arrubla and her mother said they were grateful to the paramedics and the dispatcher who helped bring the twins into the world safely.

Mother and grandmother were happy that Elian and Elena were a quick labour amounting to just 45 minutes, compared to the nine-hour labour for their big brother, Anderson, now 7, and seven hours for big sister, Cataleya, now 6.

“Thank you for getting it so fast. They did an amazing job,” said Arrubla, who just started her University of Guelph-Humber online degree program in early childhood education in September and is set to start her new semester on Monday.