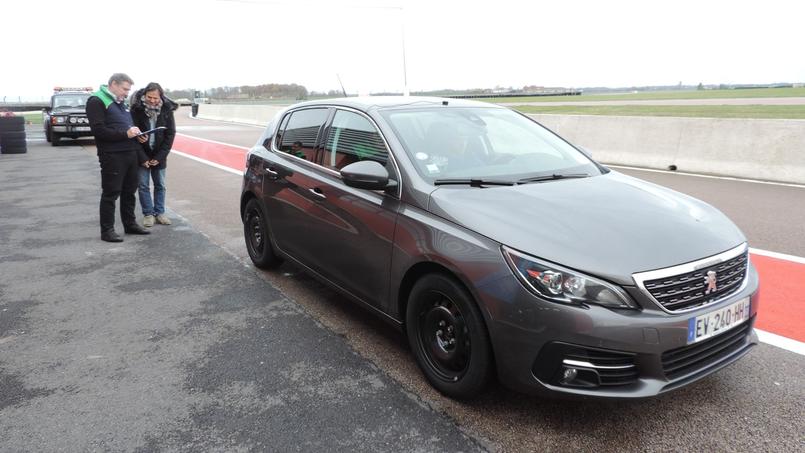 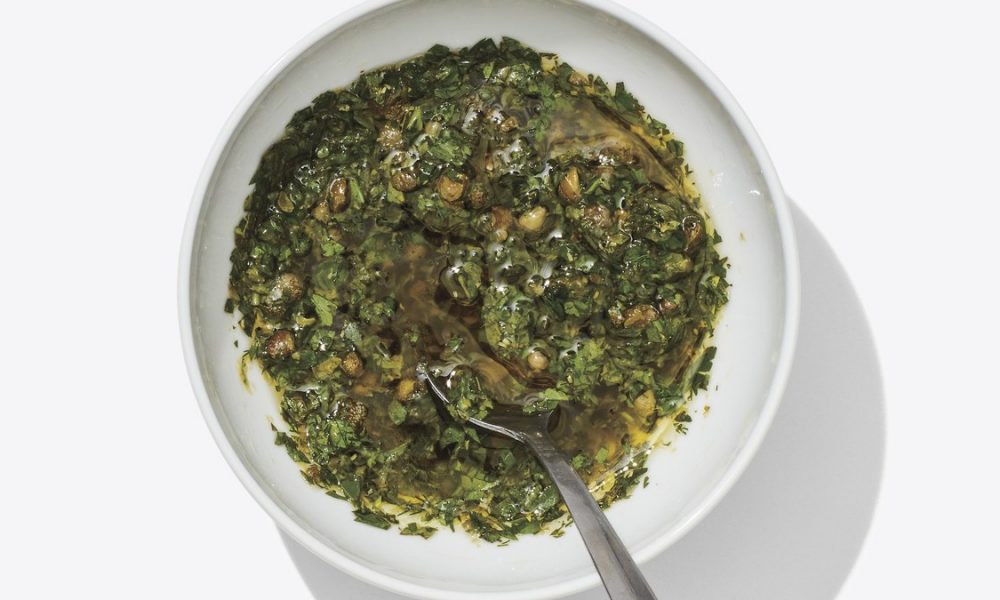 If you only make one type of sauce on the regular, it should be salsa verde. The biggest misconception about salsa verde is that it’s literally salsa—as in, to dip tortilla chips in. But it’s so much more than that. It’s a category of green sauces that are served cold or room temperature and uncooked. Almost every country has its own favorite green sauce, and it can be vinegar-forward, oil-forward, or made of mostly vegetables. Popular salsa verdes include Argentinian chimichurri, Italian pesto, Mexican tomatillo and/or avocado salsa, and French sauce verte.

Most all salsa verdes are five ingredients or less—garlic, herbs, oil, vinegar, and sometimes some form of heat like chiles or chile flakes—and work well as a marinade or finishing sauce for virtually any meat or vegetable. These green sauces are also as versatile and multi-purpose as mayonnaise: they can be a dip, spread, sauce, or condiment. Try it with anything from grilled chicken to eggs to dip for vegetables.

Not sure of what green sauce to use? Here’s a quick guide.

If your main ingredient is a little more hearty and robust like steak, top with a vinegar-based salsa verde to cut through the heaviness, like chimichurri. The quick sauce—garlic, parsley, cilantro, red wine vinegar, and olive oil—is particularly great on quick-cooking skirt, hanger, and tri-tip steak, but it would taste good with any meat, TBH.

If you’re cooking something a little milder—like fish, pasta, chicken, or vegetables—an oil-based pesto or mayonnaise-based sauce verte is probably a better way to add more flavor and more fat. Ideally, you don’t want fat on fat. Pesto can be made a million different ways, with different greens—even kale and collards—olive oil, cheese, and nuts. Try it for grilled chicken, and then use the leftovers for pasta or potato salad.

Salsa verde in Mexico is a green salsa, which could be tomatillo or avocado based. However, salsas are typically referred to by ingredient, not color. So if there was an avocado salsa, it’d be « salsa aguacate » and not « salsa verde. » It’s served with tacos and other dishes, but the tart flavor would also pair well with grilled shrimp.

Now that you’re educated on salsa verde, use it for everything. You can top grilled tofu, fried pork scaloppine, beer-braised brisket, broiled red snapper, or one of our favorite weeknight dinners, crispy sheet-pan meatballs with salsa verde. It only gets more flavorful as it sits—though the color will darken slightly as the herbs oxidize—so you can make your coworkers green with envy when you bring leftovers it for lunch the next day. What are you waiting for? Go make a double batch right now. 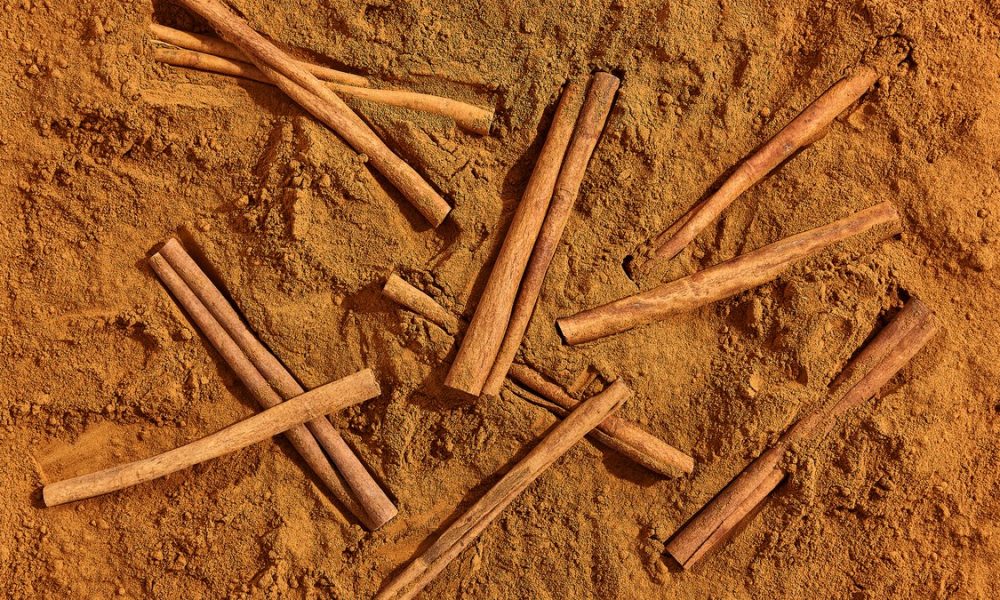 From here on out, your life will be split into two periods: the time before you read this article and the time after. Before, you were young and naive, an amateur in the world of cinnamon. After, well, after you read this, you’re going to be a cinnamon professional, a walking, talking cinnamon encyclopedia. You’ll know that all cinnamon isn’t the same. That there are different types of cinnamon that originate from and grow in different places. And they all taste a bit different from one another.

Cinnamon is separated into two main categories: cassia cinnamon and Ceylon cinnamon. While both are harvested in sheets found beneath the bark of trees belonging to the same scientific family, they produce distinctly different products. The two types of cinnamon are differentiated by the way they are harvested, their taste, their smell, and the chemical compounds found within them. Let’s start with the most commonly available version: cassia cinnamon.

Cassia cinnamon is what you probably know as cinnamon, the ground red-brown powder that’s found in spice cabinets and suburban grocery stores across the country and the world. Before it’s ground, when it’s in bark-like form, cassia cinnamon is rougher in texture, darker in color, and rolled in thicker sheets than Ceylon cinnamon. Cassia cinnamon’s potency is what made it the go-to for home cooks and industrial producers—it has a more intense flavor, so a little bit of that special powder goes a long way.

There are three specific types of cassia cinnamon—Indonesian, Chinese, and Saigon—all with different levels of flavor and situations that they are best suited for. Indonesian cassia is the sweetest and most mild of the cassia cinnamons, and is the most common in America. Chinese cassia, on the other hand has a strong, bitter flavor. Chinese cassia isn’t as common in the States, and is mainly used medicinally in China. And then there’s Saigon cassia, which is intensely fragrant and flavorful, almost spicy, and generally our preferred cassia variety.

Now, let’s talk about Ceylon cinnamon, a variety sometimes referred to « true » cinnamon » and native to Sri Lanka. If you ask us, this is the good stuff, and like most good things, it’s a little more expensive and a little harder to find at your standard-issue grocery store. When Ceylon cinnamon is harvested, the sheets that are taken from the tree are usually processed by hand and rolled into flat layers that are much thinner and finer in texture than those rolled from cassia cinnamon.

And then there’s the taste. Ceylon cinnamon’s flavor and aroma are extremely mild and delicate—it definitely reads as « cinnamon, » but with subtle, almost floral notes in there. Tasting Ceylon cinnamon is like listening to your favorite vinyl record on a $4,000 stereo system, from the comfort of a leather Eames lounge chair, while cassia cinnamon is like listening to an mp3 version of the same album on the stereo in your friend Steve’s 1993 Honda Civic. You can still appreciate the music in the car, but…the chair. That’s where you want to be.

Some people will tell you that that cassia cinnamon is « fake » cinnamon and Ceylon cinnamon is real cinnamon. This is not true. They are both real types of cinnamon, but we’re inclined to think that Ceylon is a higher quality spice across the board. Using cassia cinnamon is totally fine, but Ceylon cinnamon is definitely worth seeking out, especially if you’re a cinnamon-flavored dessert enthusiast. For the sake of your taste buds, your food, and the speakers in your friend Steve’s Honda Civic. Everyone wins.

And then use that cinnamon in some banana pudding: