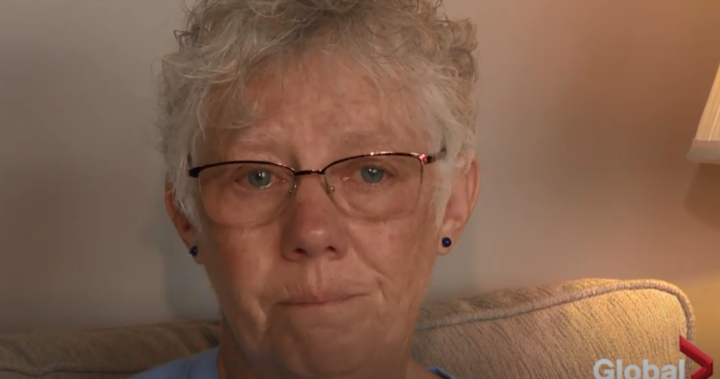 Ellen Flemming’s trip home from British Columbia to New Brunswick was not going as planned on Aug. 18. She had spent the previous night with her husband and two grandsons in Toronto’s Pearson International Airport after their connection to Saint John was cancelled. The family boarded Air Canada flight 8946 just after 8 a.m., eager to get home.

The 71-year-old never imagined she’d be removed from the plane later that day and allegedly threatened with a lifetime ban by Air Canada. It started with a confrontation with a flight attendant over garbage.

“I went to put my water bottle into the pouch in front of me, and I put my hand in and pulled the pouch out, and my hand, my fingers went into this wet garbage,” Flemming said.

She called the flight attendant over to ask him to clean it up.

“And he just stood up tall and said, ‘I’m a flight attendant, I don’t do garbage,’” she said.

“I didn’t know what to do except I just sat there until the cart came down and I thought OK, I’m going to pick it up and there’s usually a little garbage container on the top of the cart, so I thought I’ll put the garbage in that.”

Flemming says she pushed the garbage into the aisle with her foot, as the flight attendant again said he wouldn’t pick it up.

The woman who was sitting behind her and across the aisle says she watched the incident unfold. Helen Hollett describes the flight attendant as “irate” and “screaming.”

“She just asked him to take the garbage and she was very nice about it and then he just, he got really mad,” Hollett said.

Both women tell Global News that Flemming tried to de-escalate the situation, closing her eyes and not responding when two flight attendants tried to speak with her.

Shortly after that, the plane turned around. Hollett says she asked the crew why they were returning to Toronto.

“I said, ‘Well, if it’s because of the garbage, I’ll clean the garbage if you want me to,’” Hollett said. “And he said no. He said, ‘We’re going back for the safety of the passengers.’”

When the plane landed in Toronto, two Peel Regional Police officers and an Air Canada agent boarded and asked Flemming to leave. She says the Air Canada employee told her she would be rebooked on another flight.

WATCH BELOW: Here are some of your rights as an airplane passenger for cancellations, delays

Flemming told the Air Canada agent and the officers what happened, as the plane took off with her husband and grandsons on board.

But when she tried to get another boarding pass, “I got nowhere with Air Canada,” she said.

“The manager behind the desk, she just said, ‘You’re not ever flying Air Canada again.’”

Flemming bought a ticket with Westjet to Halifax, and arranged for a ride home from there.

Air Canada confirms in an email to Global News that a passenger was removed from the flight on Aug. 18, and that local authorities were called to meet the flight.

In a letter addressed to Flemming dated Aug. 30, Air Canada corporate security gives a different version of events. The letter states that she “exhibited aggressive behaviour towards a crewmember; threw garbage on the food trolley; kicked a crewmember when requested to wait until the member could come back and pick up the garbage as he was serving food.”

The Aug. 30 letter adds there is no “ongoing prohibition” that bans Flemming from travelling on Air Canada flights.

Flemming denies Air Canada’s version of events on board the Aug. 18 flight.

The Peel Regional Police, whose officers boarded the plane, give yet another account of the dispute.

In an emailed statement, the force says: “Police spoke with the individuals involved in the incident as well as other passengers seated in the vicinity of the incident. Based on the information received, it was determined that both parties were involved in a loud verbal dispute. Police concluded that no criminal offences were committed.”

Flemming says she asked police to lay an assault charge against the flight attendant in September. She says she was told by the responding officer that there was no probability of conviction, and that she could pursue a civil case if she chooses.

The airline would not agree to an interview or answer questions about what happened, but sent an emailed statement that reads in part:

“We strive to provide a safe and comfortable flight for our passengers and a safe working environment for our employees. Our crew members are professionals who are well-trained to handle challenging situations. We are unable to provide further details or discuss individual passenger files or incidents for reasons of privacy. We encourage customers to contact Air Canada Customer Relations directly with any concerns.”

WATCH BELOW: ‘She didn’t kick him’ — Witness recalls garbage conflict between flight attendant and passenger

Flemming has contacted customer relations. She says the only response she received is that letter. That’s why she turned to air passenger rights advocate Gabor Lukacs. He helped contact witnesses who were on board the plane to corroborate Flemming’s story, including Helen Hollett, who has signed a sworn affidavit explaining what she saw.

Hollett says she didn’t know Flemming before Aug. 18 but felt compelled to speak up when she heard another passenger say that the flight attendant was alleging he had been kicked.

“I don’t think that we should be treated that way. I mean, we pay good money for these seats. I do not think that Air Canada should treat people that way.”

Lukacs agrees. He’s assisting Flemming in navigating her next steps, which he says include exploring legal options. He thinks she’s entitled to “significant compensation.”

Ultimately, he also wants to see changes in the way the airlines and the police handle these situations. He thinks video surveillance on flights would eliminate the he said-she said nature of an investigation like this one.

“Having some form of surveillance would be very important, both for the passengers and for the flight attendants,” Lukacs said.

He also wants the airlines to be more accountable when passengers are removed from flights.

As for Ellen Flemming, she calls the events of that August day “life-changing.” She’s hoping the airline will apologize and reimburse the cost of her WestJet flight.