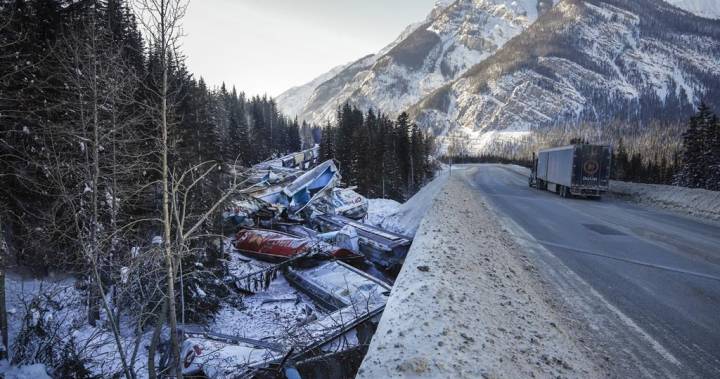 The Transportation Safety Board of Canada (TSB) will release more details about a deadly train derailment in B.C. at a Tuesday morning news conference.

The conference, which will be held in Calgary at 11 a.m. MT, will be live streamed on GlobalNews.ca.

The crash on Monday near the Alberta-B.C. border killed the train’s three-person crew, including Dylan Paradis, engineer Andrew Dockrell and trainee Daniel Waldenberger-Bulmer. All three men were from Calgary.

The Canadian Pacific Railway (CP Rail) freight train was heading west when it went off the tracks, plunging into the Kicking Horse River just east of Field, B.C., at about 1 a.m. MT.

WATCH: Aerial footage shows the extent of the damage after a fatal train derailment near Field, B.C.

According to CP Rail president and CEO Keith Creel, the derailment happened between the Upper and Lower Spiral Tunnels, which were built in the early 1900s to accommodate the steep grade change on the stretch of railway.

“This is a tragedy that will have a long-lasting impact on our family of railroaders,” Creel said.

He added that recovery of the derailed cars will be “complex and challenging given the remote location and extreme weather.”

The circumstances that led to the derailment are being investigated by the TSB.

Sixteen cars of a CP Rail train derailed on Jan. 3 in the same area. No one was injured in that derailment.

— With files from Heide Pearson and Spencer Gallichan-Lowe