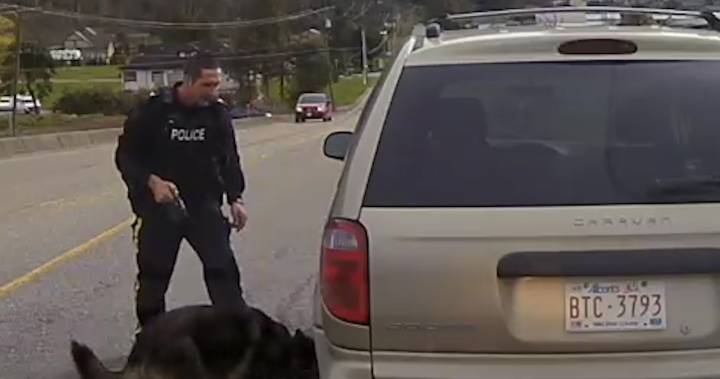 A B.C. Justice recently threw out the case against a man charged with trafficking 27,500 fentanyl pills.

In a decision published in January, he said it wasn’t clear if the dog sat or not.

And new video, obtained exclusively by Global News, shows the entirety of the traffic stop, including the moment the dog investigates the vehicle.

READ MORE: Did the drug-sniffing dog sit or not? Debate leads to man’s acquittal in B.C. fentanyl bust

Here’s why the extent of the dog’s sit matters: If the dog properly sat down, it would have indicated the dog was “in odour,” meaning it had found drugs.

But in the case of Sandor Rigo, who was stopped on a Chilliwack highway in April 2017, the dog, named PSD Doods, was unable to sit down all the way. The police officer who made the stop said this was because a curb was in the way.

An officer who stopped Rigo – only identified by the Justice’s decision as Corporal Catellier – said he believed the dog was in odour and had the car towed so it could be thoroughly searched. Police say over 27,000 fentanyl pills were found in the wheel well.

The dash-camera video from the RCMP vehicle, obtained by Global News, offers a partial view of what happened.

The video shows the officer pulling over Rigo, who was driving a Dodge Caravan. The officer can be heard asking Rigo where he was going and why he appeared to be shaking. Rigo answered that he was picking up used tires from a friend and he was shaking due to hypoglycemia, a condition which requires people to eat frequently to keep their blood-sugar levels stable.

Rigo was then asked to exit his van and sit in the RCMP vehicle. That’s when Cpl. Catellier brought PSD Doods to sniff the outside of the van.

The dog can be seen sniffing the outside of the driver’s side of the van. She is then directed to the passenger side of the van, which is out of view of the dash camera, and next to a high concrete curb.

On the video, the moment in question can be heard, but only partially seen. The officer repeatedly says, “Good girl,” to PSD Doods, as she is seen at the side of the car. .

An expert witness in court said the dog wasn’t showing other signs of being in odour — which normally includes wagging her tail.

But the officer testified at the time that she displayed the other signs when she was out of sight of the video.

In his decision, which was made public in January 2018, Justice Michael Brundrett said since the dog was only shown in a “partial form of ‘alert,’” there wasn’t reasonable grounds to search the vehicle.

Brundrett said Rigo’s charter rights were violated, specifically articles 8 and 10(b), which pertain to the right to be secure against detainment, search and seizure, and the right to a lawyer.

Because of this, all evidence collected after the charter breach had to be thrown out.

Criminal lawyer Dino Bottos said even if the officer is proven correct because drugs were found in the car after the fact, in cases like these the public has to remember that “the ends do not justify the means.”

He said the judge has to maintain impartiality.

“When a judge excludes evidence obtained during an unlawful search and seizure, he or she is doing so not to favour a particular accused, but rather to uphold what is written into our Constitution,” he explained.

Anything obtained after the charter violation – in this case that would be the physical drugs as well what appears to be a video of Rigo’s confession – is “considered fruit from the poisonedtree.”

“If we’re serious about protecting rights and freedoms, that means that we need to exercise control over police state actions,” Bottos explained. “Which means in this case, when there is a breach of a right, then the only reasonable remedy is to exclude the evidence found as a result of that breach.”

Almost a dozen Canadians died every day from opioid overdoses last year. Since 2016, more than 8,000 have lost their lives, primarily to fentanyl. In British Columbia, the problem has become so bad that life expectancy has dropped for the first time in decades.

The amounts traffickers are bringing in are believed to be so vast that investigators suspect their money laundering has disrupted the Vancouver-area housing market. It has also put a spotlight on casinos. But when police seize their illicit cash, traffickers often just walk away, seemingly unfazed.

Brundrett said in his decision that it was a serious case, because of the “evils” of fentanyl trafficking, but the integrity of the justice system had to be taken into account.

*With files from Sam Cooper