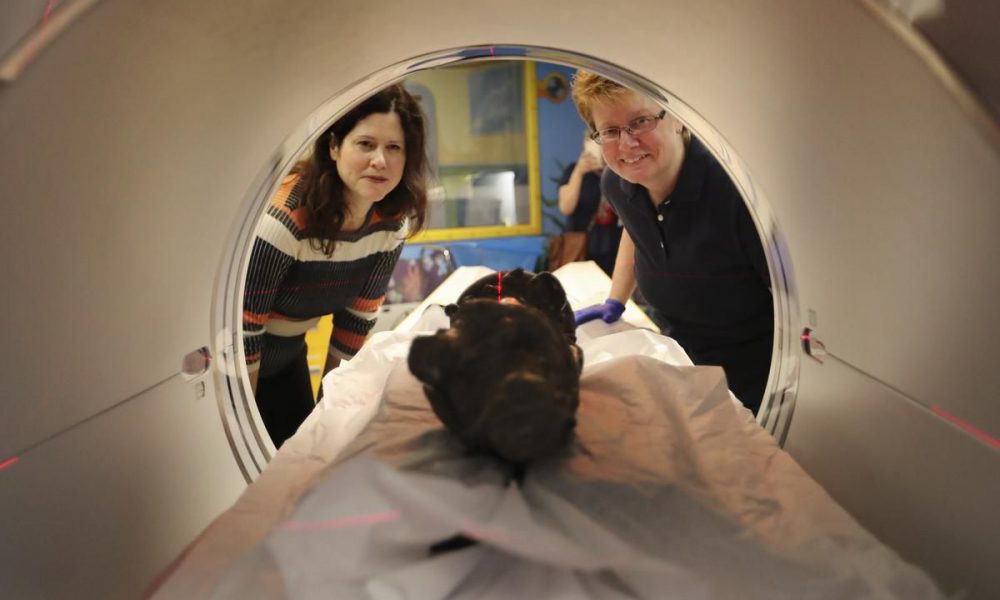 Like all interesting characters, the 300-year old virgin being prepped for a CT scan at Sick Kids harbours secrets.

Who carved this statue, believed to be a treasure of early Canadian art? What precisely is she made of? Was she given breast reduction surgery?

Those are the questions the Art Gallery of Ontario had hoped would be answered by submitting the statue to high-tech examinations that her likely creator, steeped in religion and working in an atelier in New France in the early 1700s, might have described as miraculous.

And so on a dingy day in late November, the Virgin and Child statue was swathed in Tyvek, a smooth synthetic fibre used to wrap houses to protect them from moisture, and nestled in foam inside a Clydesdale case — the same brand used to ship the Stanley Cup — and then walked 650 metres from the AGO to the Hospital for Sick Children by museum conservator Lisa Ellis.

“It’s very rare for us to hand-carry objects in cases outside of the building, so we do that only in really special cases like this,” said Ellis.

The figure of the Virgin Mary and baby Jesus is arguably the finest early-18th-century Canadian sculpture in the AGO’s collection, according to Ellis. It is believed to have come from a school of arts and crafts in what is now the Quebec City area, founded by an artist from Bordeaux who emigrated to New France in 1690 at the age of 19.

The detail of the carving — the flow of the virgin’s robes, the articulation of the hands and her feet atop a serpent representing the evil in the world — speaks to the talent of the artist.

It was donated to the Art Museum of Toronto, forerunner to the AGO, in 1935 by the son of the founder of Salada Tea.

“She’s a really wonderful thing, definitely a treasure of the early collection,” said Ellis, whose own atelier is the Michael and Sonja Koerner Centre for Conservation at the AGO, an airy suite of rooms with soaring ceilings and abundant natural light, where paintings, sculptures, decorative arts and works on paper are brought to be conserved, examined and analyzed.

But the statue was painted and the robes and part of the base were gilded — covered in a thin sheet of pounded gold, making it impossible to tell for sure whether it is one piece of wood or many. The museum stickers on the bottom reveal something of the statue’s history. This virgin travelled internationally — to an exhibit in Detroit, called the Arts of French Canada, in 1946. Another sticker reveals she was the 2,306th object that came into the gallery’s possession.

The stickers also obscure what is believed to be an inscription.

Museums don’t put stickers on the bottom of statues anymore, Ellis said, nor do they remove existing ones.

The AGO wanted to know if beneath the paint the sculpture was all one piece and whether the stickers were hiding the name of the sculptor.

“Generally, wooden sculptures are considered to be finer if they are made out of a single piece of wood, and there were actually guild rules about that in the Renaissance,” said Ellis, whose specialty is sculpture and decorative arts.

“You weren’t allowed to add things to sculptures because it would mean it was an inferior product. Also, if something is made out of pieces, it affects its stability, and so, as a conservator, that would be my number-one concern — how stable is this object?”

There were other considerations. Early virgins were often carved with voluptuous figures which were whittled down in a later, more puritanical age.

Once at the hospital, Ellis and a conservation intern, Julia Campbell-Such, unpacked the statue with reverence and care. Both donned gloves, not just to protect the statue from the oils and any other contaminants on their skin, but also to protect their skin from the statue, which over the years has been painted with pigments containing toxins including mercury and sulphur.

Sick Kids was a pioneer in the use of CT scans for art history research — it partnered with the ROM in 1976 to help learn more about a mummy in the museum’s collection. Mummies are an obvious choice because they are the shape of human bodies, and scanners are meant to pick up the difference between flesh and bone.

The Virgin and Child was the first work of art the AGO brought to the hospital for diagnostics.

A CT scan can be a terrifying machine to children, and so the one at Sick Kids has been wrapped to look like a submarine and the walls and part of the ceiling are painted with fish and other marine life.

Mothers often ask to be allowed to take the test with their children, so they can comfort them, but because of the exposure to radiation, they are required to remain outside the room.

“It’s the first time we’ve scanned mother and baby at the same time. That was a new thing for us,” said Guila BenDavid, manager of CT and nuclear medicine at the Hospital for Sick Children.

The CT scanner is shaped like a giant doughnut — round, with a large hole in the middle. Patients lie on a table that moves through the hole while X-ray beams shoot across it from every position in the circle and are captured on the opposite side by a detector.

It is able to create images of organs, bones and other tissues, in greater detail than simple X-rays. It’s used to diagnose bone fractures, heart disease, blood clots and cancer.

CT scanning produces hundreds of thin slices of information — imagine cutting precisely and thinly through a loaf of bread — that can be examined separately or piled together to create computerized 3D models, allowing curators to get inside a work of art, even beneath layers of paint. The virgin-and-child was scanned multiple times, producing 1,561 images.

The AGO got lucky — there were no medical emergencies requiring a CT scan while the virgin was being scanned.

“We don’t do that much CT anymore,” said BenDavid. “We used to, but predominantly here at Sick Kids, if we can avoid using radiation on our patients, we do that, so we use ultrasound or MRI or other modalities that don’t use radiation.”

The hospital charged a fee for the service.

The control room where the scans are done is typically a quiet place, with an atmosphere not unlike a church, where people speak in hushed tones about life and death matters. But on the day of the CT scan, the control room was filled with experts in medicine and art, animated by the novelty of the task.

It was immediately obvious that the statue was carved from a single piece of wood — even the grain was visible on the CT scan. But there was disappointment, too. There is no inscription on the bottom of the statue, just some shallow grooves that look like it was clawed by some kind of instrument. The scan did uncover a short tunnel drilled in the bottom of the statue, suggesting she was anchored somewhere — perhaps part of the altar of a church. Campbell-Such, a cabinet maker, determined that it was not likely caused by a lathe.

The question of the breast reduction surgery was definitively resolved.

“I was interested in seeing if she had received a breast reduction. She did not. This is her in all of her natural glory,” said Ellis.

But the identity of the person who carved the precious artifact remains a mystery, for now.