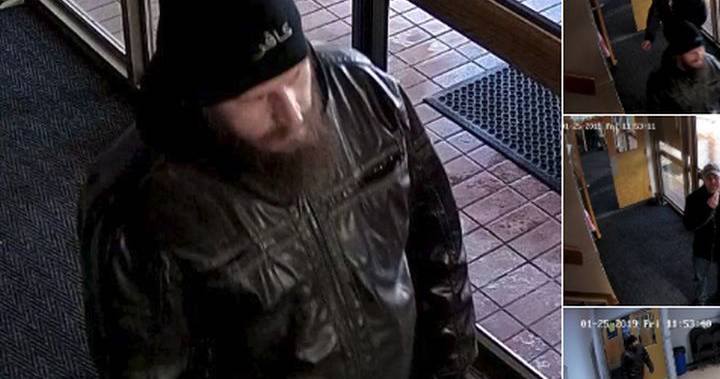 Edmonton police said their hate crimes unit was called in to help investigate after a prominent and well-attended mosque in the northwest part of the city was visited by a group whose activities are known to police.

A police spokesperson told Global News they could not identify the group being monitored because “groups change names and alliances frequently, so there’s no consistent name they go by.”

The communications director of Al Rashid Mosque said people she works with were very concerned when the men visited.

“There were two suspicious men that came into the mosque [and] we were not sure what they were doing,” Noor Al-Henedy told Global News. “One of them was wearing a toque with the word ‘infidel’ on it in Arabic. We didn’t pay attention at first until our executive director went upstairs.

“They toured the mosque, came upstairs to the women’s section… they were just looking like they were scouting the place and then he (one of the men she called suspicious) went downstairs and went to the bathroom.”

“The security and safety of everyone that was coming to pray in the mosque was our priority,” she said. “So we called the cops right away to get them to come and evaluate the situation and eliminate any threats that may have happened because we were not really sure what was happening.

“We are entrusted by our community as an organization to make sure that we have the freedom to practise our religion and we wanted to make sure that everybody was in a safe place and nobody was getting harassed.”

Ty Hunt told Global News he was one of a group of five men that went to the mosque so that he could use the bathroom and they could ask questions about Islam. He said it’s hard for him to ask questions of Muslims because “there’s no Muslims at the Yellow Vest rallies” and “it’s hard to run into a Muslim on the street.”

Hunt is the bearded man seen entering the building to use the bathroom, and who was wearing the toque that says “infidel” in Arabic.

“I’ve got a tattoo on my neck that says ‘infidel’ as well… it just means non-believer… in anything,” Hunt said.

“The Christians don’t get offended by it…I’ve gotten more feedback by the Muslims than I have anybody else…. I put it on my neck because it’s time for them to get over it. You’re in Canada, now it’s [time to] integrate into Canada.”

In a phone interview, Hunt told Global News he is a former member of the Soldiers of Odin, a far-right group that has members that “adhere to extreme right-wing ideology and are not afraid to use violence,” according to a declassified Canada Border Services Agency intelligence report obtained by Global News

Watch below: (From September 2018) A few blocks away from where thousands of people gathered for an annual Labour Day barbecue in Edmonton, a protest was held against a group known for its far-right views. Kim Smith reports.

Hunt said he left the group and joined another one known as The Clann. He said he is involved in a movement that is opposed to the United Nations because of a threat he said it poses to Canadian sovereignty. He said he supports the Yellow Vest movement and has “questions about Islam.”

Police said officers showed up at the mosque at around noon but there were no arrests.

Noor Al-Henedy said police also went to the Edmonton Islamic Academy to make sure everyone was safe there.

“We are working with them (police) to make sure such incidents do not happen again,” she said.

“Hearing that a hate group is openly harassing and terrorizing people in #yeg with racist and homophobic attacks and posters is beyond upsetting,” her tweet read. “This is not who we are.

“There is no room for this kind of hate in the strong, open and optimistic Alberta that inspires me and is our home.”

1/2
Hearing that a hate group is openly harassing & terrorizing people in #yeg with racist & homophobic attacks & posters is beyond upsetting.
This is not who we are.
There is no room for this kind of hate in the strong, open and optimistic Alberta that inspires me & is our home. 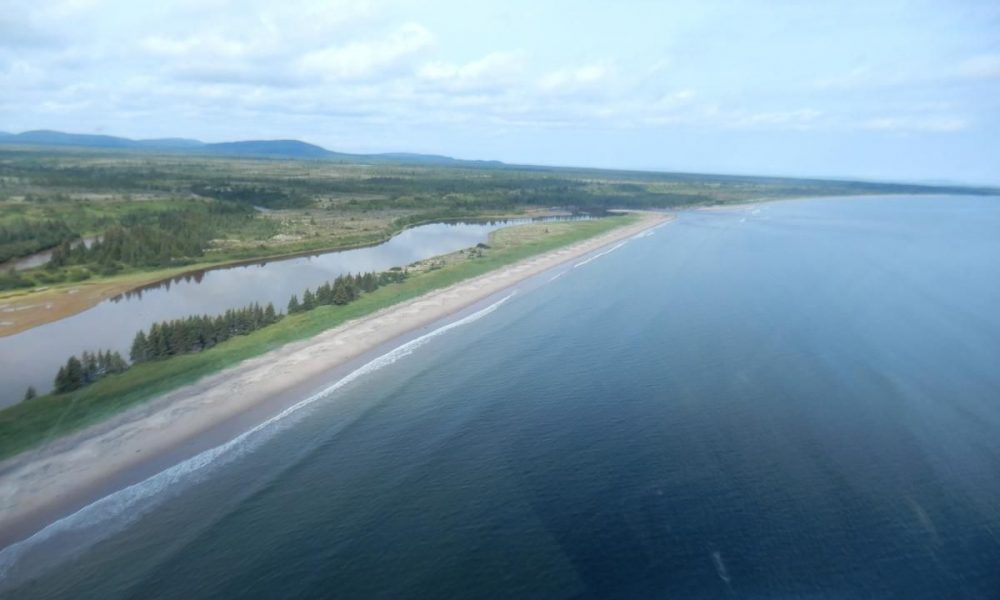 No asterisks, no missed reserves, no exceptions.

To do so, this summer I had to fly as far north as commercial airlines will go and then to the wilds of central and eastern Labrador.

My odyssey began early last year as a personal celebration of Canada’s 150th birthday with the goal of visiting every park. Now complete, I have trekked more than 100,000 kilometres to each province and territory in 18 separate and memorable journeys.

I visited 45 parks last year, but one new northern park officially opened later last year and a national reserve had somehow escaped my list. Thus my goal was not complete.

My first trip took me to the tiny Inuit hamlet of Resolute Bay on the south shore of Cornwallis Island, overlooking the Northwest Passage. Its street plan is laid out like the hoofprint of a caribou, and its 175 inhabitants live a stone’s throw from a giant airfield and weather station built in the ’40s by both the U.S. and Canada.

Resolute was created in 1953 as part of a High Arctic relocation program to assert Canadian sovereignty during the Cold War. Inuit from northern Quebec and Baffin Island were promised homes, and game to hunt. When they arrived, they found neither.

A promise to be able to return home after one year was also rescinded. In the ’90s, a royal commission recommended the survivors and their families be given $10 million. They finally received a formal apology from Ottawa in 2008.

Resolute is the jumping-off point to visit Qausuittuq National Park (pronounced kow-soo-ee-took), which means “place where the sun doesn’t rise” in Inuktitut. Located on the northern part of adjoining Bathurst Island and the Governor General Islands, it is approximately 11,000 square kilometres of Arctic tundra and ice-clogged waters.

Since the park is situated in one of the coldest and driest regions on earth, soil development and vegetation is sparse.

A visit in the recommended six-week window in midsummer comes, of course, at a time when the sun never sets. So it was as I set off with park director Jovan Simic in a chartered Twin Otter.

As it is with all northern charters, weather is always critical. When we took off, there were snow flurries and we encountered several snow squalls during the three-and-a-half-hour flight.

Simic, a one-time tennis pro from Toronto, has become a passionate environmentalist, intent on working with local Inuit in the joint management of this remote wilderness.

“We have a joint management committee and I speak with the elders about everything,” he explains. “One of their principal concerns was the survival of the Peary caribou population. The community has also been pushing for the clean-up of oil barrels abandoned from earlier Arctic exploration.”

As we fly over the still ice-clogged Northwest Passage, the impressive cliffs on the eastern edge of the park shortly come into view. From there unfold rolling hills, lowlands and highlands as far as the eye can see.

There is ne’er a tree or any appreciable vegetation to be seen. Patches of snow are all that interrupt the vast brownish tundra and rock.

We are able to land on a gentle hillside of tundra where Parks Canada has set up a retreat of two orange spherical “igloos,” where an overnight stay is possible. We see a small herd of muskox in the distance and what seem like wild swans in a nearby pond. Patches of purple saxifrage push up from the mushy tundra.

“So what do you think of our site?” an ever-so-proud Simic asks. As the snow flies, a reply does not come easily.

For my second trip of the year, I fly to Goose Bay in Labrador, a bustling community also set up next to a giant airfield. Now a Canadian air base, Goose Bay was built in 1941 as a strategic landing and refuelling spot for aircraft during the Second World War.

It is also the jump-off point to visit nearby Akami-Uapishk-KakKasuak-Mealy Mountains National Park Reserve.

Roughly the size of Jamaica, the reserve stretches for 10,700 square kilometres from the mouth of the fabled Churchill River to the Atlantic Ocean. The traditional names of the park are Akami-Uapishk, an Innu word meaning “White Mountains across,” and KakKasuak, a Labrador Inuit word for “mountain.”

There is no road access to the park, and Parks Canada is still working with local Innu on a co-management plan for the area.

I charter a helicopter for a morning and soon after takeoff, the bare rock summits of the Mealy Mountains come into view. One can imagine the glaciers rounding off the tops and carving out narrow lakes below. On the north, the glistening waters of Lake Melville stretch all the way to the ocean. The rounded mountains, tundra and boreal forest are home to many species of wildlife, including the threatened Mealy Mountain caribou.

As we continue flying over flatter terrain, the Atlantic Ocean comes into view and all of a sudden emerges a pristine, seemingly endless sand beach. Called Wunderstrand, this 50-kilometre stretch of beach was recorded in ancient Viking sagas, most notably by Eric the Red.

Somehow the idea that Labrador meets the Atlantic, in a limitless sand beach that looks as pristine as possible, defies imagination. Yet as we fly north, the beach stretches out as far as the eye can see.

As we fly back to base along the shore of Lake Melville, I contemplate the glory and majesty of this land we call Canada. It is what sets us off from the rest of the planet.

And there is no doubt the 47 national parks are the crown jewels.

John Honderich is chair of the board of Torstar, the Toronto Star’s parent company.