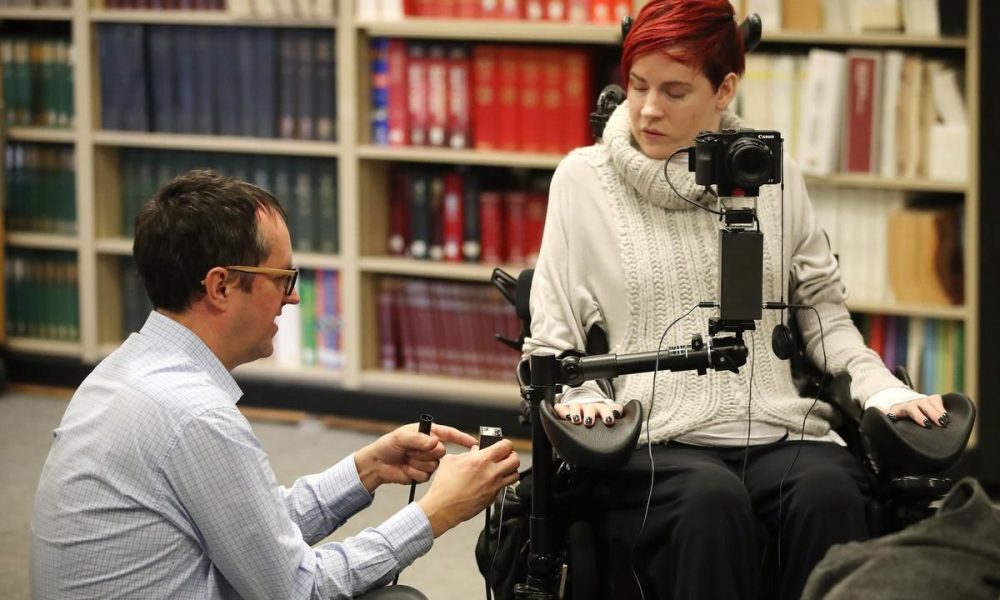 As a trapeze performer, Carolyn Pioro made flying and flipping through the air look easy. Movement, she once said, was her life.

That changed forever in September 2005. Pioro was training for a performance with a Toronto-based circus when a mid-air flip went terribly wrong. She fell 40 feet, landed badly in the safety net and severed her spinal cord. In a painful flash of blue, she thought her life was over.

It’s hard to imagine what life as a quadriplegic is like, or the strength and courage needed to get through the day. A milestone for Pioro occurred seven years ago, when she moved to her own apartment downtown with her cat and the help of daily attendants. Another happened this year, when she enrolled in the contemporary journalism program at Centennial College and planned to shoot a photo essay of students at local schools for acrobats.

“It will be interesting to see if I emotionally fall apart during the shoot or whether I can see it all through the lens of a working journalist,” Pioro said in an interview.

So she looked for a camera she could operate using the only mobility she still has — from the shoulders up.

“I did an exhaustive search, looking for adaptive equipment that was already out there. And there was nothing,” Pioro said. “Now, had I wanted a rifle mounted to my chair that I could use, that would have been easy. There were multiple companies that would have kitted me up.”

Her professor, photographer Tyler Anderson, mentioned the problem to Star photographer Steve Russell, who in turn mentioned it to the Star’s visuals editor — and technological handyman — Taras Slawnych. Two months later, Slawnych presented Pioro with a sleek contraption he made in his basement.

It’s a black rectangular box that mounts to Pioro’s wheelchair and holds a camera that swivels and shoots to her voice commands. A microphone clipped to her sweater and attached to the device allows her to turn the camera on and off, move it from side to side, up and down — and shoot.

When the first picture snapped, Pioro’s mouth and eyes were wide with excitement.

“It’s pretty cool, and useful and awesome,” Pioro said after the test in the Star’s library Friday, when Slawnych presented her with his device.

“Trust me, I’m more thrilled than anyone else,” Slawnych said.

The device weighs less than a pound. Slawnych made the black casing with a 3D printer. Inside that, he placed an Arduino, a tiny processor he connected to a device that identifies voice commands. He hired a freelance computer programmer to help write code for the system’s servo. Slawnych also included an adapter to reduce the 24 volts from Pioro’s wheelchair battery to 12 volts for the device.

“Carolyn’s mom asked me, ‘Why are you doing this?’ Slawnych recalled. “I said, ‘Because I can.’”

“I’m quite surprised how much Taras got into such a small item,” Pioro said.

Pioro earned a degree in semiotics and environmental studies before her accident. She works as a freelance fact-checker for design magazines and decided the time was right to get further into journalism.

“So many people now disregard journalism as one-sided and not true, and journalists have become almost underdogs,” she said, noting the “fake news post-truth environment.” And since I always root for the losing team, I thought it was important to support the profession and get involved more.

“And I want to provide the best life I can for my cat,” she added, smiling. “So more work would be awesome.”

Slawnych showed his device to Canon Canada, and says their engineers are interested in tinkering with it so that Pioro can also work the zoom with her voice.

“That would be cool,” she said.