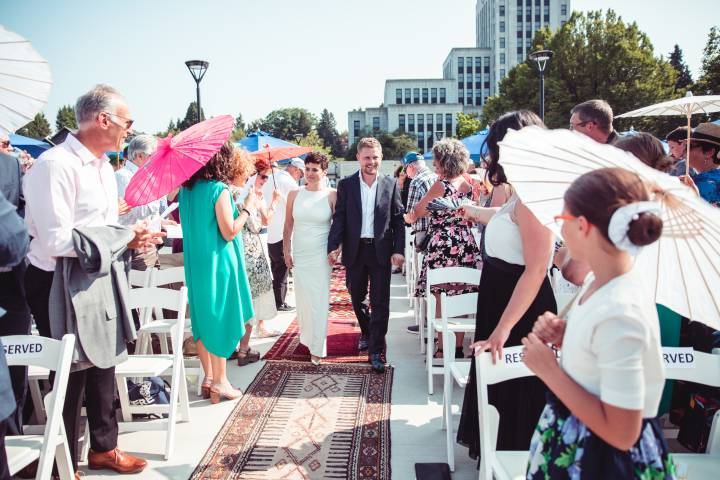 A Vancouver politician has a marriage proposal for City Hall.

Melissa De Genova is calling for a simple process that would open up the council chamber to couples who want to get hitched at City Hall — in order to cut red tape and offer affordable options for wedding ceremonies.

“People have asked me if it’s possible to book council chambers or areas of City Hall for weddings and they were quite surprised that there’s an entire program offered on Vancouver.ca, our city website, for booking park facilities. There’s a one stop shop permit program there, but not here at City Hall,” said the Vancouver NPA councillor.

Even though the Vancouver Park Board offers permits for public wedding options on its sites, the City of Vancouver currently has no formal program in place for weddings at its heritage building — although couples have tied the knot outside.

Mira Oreck and Stepan Vdovine got married on the Helena Gutteridge Plaza on Vancouver City Hall grounds this past summer — but the couple had to apply for an $800 film and special events permit — and rent their own washrooms for the big day.

“There isn’t infrastructure here. There aren’t bathrooms, there’s not shade cover for the sun or for the rain. There’s not an inside space to put any personal items so I think it’s a great idea but I think it needs to be supported by some infrastructure and resources,” Oreck told Global News.

WATCH: Secrets to marital success: BC couple celebrate 7 decades together

De Genova wants the city to consider its council chamber, Helen Gutteridge Plaza and the garden at City Hall as possible wedding venues.

In a motion set to go to council on Tues. Dec. 18, the NPA city councillor states that many other Canadian cities “including Victoria City Hall, Calgary City Hall, Fredericton City Hall, Ottawa City Hall and Toronto (both Old and New City Halls) offer the opportunity for couples to book in advance and hold wedding ceremonies on-site.”

At Ottawa City Hall, wedding costs range from “$141.30 for week day ceremonies to $212.00 for weekends, subject to availability.”

A marriage licence can also be obtained on-site for a $161.60 fee – provided all requirements are met.

In the capital city, couples can say “I do” at the heritage City Hall building four days a year – when three one-hour ceremonies are offered each day for a room rental fee of $150.

On Fri. Dec. 14, Vic PD’s top cop crashed one couple’s municipal wedding. Chief Del Manak posting a photo with the tweet, “Love is in the air @CityOfVictoria City Hall. Ran into a happy couple coming to City Hall to get married. Now @vicpdcanada is a part of their wedding pics. Congrats to Peter and Sandra. Such a great couple! May you enjoy a life of laughter and #happiness.”

De Genova wants the city to consider the structure city halls across Canada practice in providing marriage venues and services – and then report back to council by December 2019 with recommendations, including any budget implications, and recommendations for a possible pilot or trial program for holding weddings on set days of the year or regularly at Vancouver City Hall.

Vancouver’s City Hall opened in 1936 and was designated a heritage building in 1976.


READ MORE:
This couple is saving a bundle on wedding costs — thanks to Facebook

The city of Vancouver website states that, “On the third floor, the ceremonial and formal spaces including the Council Chambers are substantially intact.”

Currently, the Vancouver council chamber is not available for external bookings.

In a statement to Global News, the city of Vancouver wrote that since Helena Gutteridge Plaza opened earlier this year, it has received some inquiries about the use of the space – and one wedding, Oreck and Vdovine’s, has been held there.

Oreck says she and her husband chose the venue for a reason.

“My husband and  I met actually campaigning, door knocking for Vision Vancouver many, many years ago and so this was a meaningful space for us — but it was also meaningful because of Helena Gutteridge Plaza. It’s named after the first woman elected to city council, a labour activist, a suffragette.”

The emailed city statement says a permit to hold a wedding at a city-managed public space such as the Helena Gutteridge Plaza can be requested via the Film and Special Events group and that “the fees associated with that depend on where/how many people/what type of event, etc.”

“It’s a fun light-hearted motion for our last council meeting of the year, ” said De Genova.