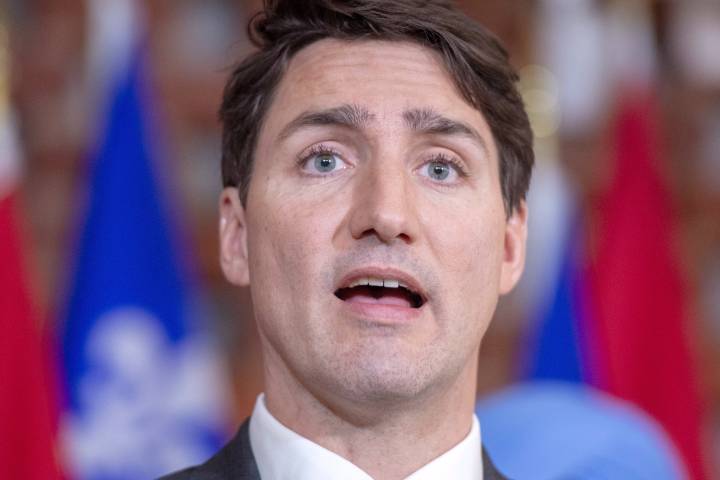 Instead, it is the current political situation south of the border that’s to blame.

“If people are in the midst of migration around the world right now, it’s not because of a tweet restating — almost word for word — Canadian policy on refuges, because that’s exactly what it was,” he said in a year-end interview with the West Block’s Mercedes Stephenson.

WATCH BELOW: Trudeau says Canadians should feel proud to sign the UN Compact on Migration

Roughly 35,000 migrants have crossed the border into Canada at unofficial entry points since early 2017.

The influx came amid the election, inauguration and resulting escalation in anti-immigrant rhetoric and policies of U.S. President Donald Trump.

On Jan. 28, Trudeau posted a tweet that Conservative critics have argued encouraged what turned into a wave of irregular migration.

To those fleeing persecution, terror & war, Canadians will welcome you, regardless of your faith. Diversity is our strength #WelcomeToCanada

At issue is a loophole in the Safe Third Country Agreement which governs how asylum claims are handled between Canada and the US.

Under the terms of the agreement, anyone who lands in either the US or Canada must make their claim in whichever of the two countries they first arrive in.

Those that try to make a claim in Canada after having landed in the U.S. will be returned to their country of origin.

WATCH BELOW: Trudeau unapologetic after calling protester a racist

But that agreement does not say that those who cross from one country into the other through unofficial checkpoints will also be rejected automatically for not making their claim in the first country where they arrived.

Conservatives want the Safe Third Country Agreement applied to the entire border — but as a bilateral treaty, it cannot be changed by Canada alone.

Border Security Minister Bill Blair has said the government is discussing the matter with American officials. So far, though, there has been no progress towards closing the loophole, which would effectively require more people to stay and make their claim for asylum in the U.S., where Trump has been consistently denouncing immigration and, in particular, immigrants from what he deems “shithole countries.”

WATCH BELOW: Poll suggests most Canadians say irregular border crossings are a ‘crisis’

In August, a heckler confronted him at an event in Quebec and demanded to know when the province would get federal cash as compensation for dealing with the influx crossing at Roxham Road, which has become the situation’s epicentre.

In response, Trudeau criticized the woman for her “intolerant” views and said “your racism has no place here.”

He has also consistently said those who try to make the issue out to be a crisis are playing “the politics of fear and intolerance.”

Trudeau rejected the notion that he has been critical of those raising legitimate concerns about immigration.

“No, I haven’t been critical of people who’ve raised concerns. I recognize that there are lots of legitimate questions: are we processing these people right? Are we investing enough money in the system to be able to handle this? And we have invested more and we’re improving our systems,” he said.

“Where I have been critical is people who are disseminating falsehoods to try and turn Canadians against immigration.”

READ MORE: More irregular border-crossers have arrived so far this year than by this time last year

He pointed to Conservative criticism of the government’s decision to sign the UN’s Global Compact on Migration, a non-binding agreement between 164 member states that sets out a framework for best practices on dealing with immigration.

READ MORE: Canada is set to sign onto the UN migration pact. Here’s what you need to know

The compact quickly became a focus point of the far-right, with figures in the movement suggesting it would erode the sovereignty of countries that sign on and reduce their power to control their own immigration systems.

In reality, no provisions of the agreement are legally binding or change how existing immigration systems operate, as former Conservative immigration minister Chris Alexander also pointed out on Twitter.

Scheer’s statement is factually incorrect: this Compact is a political declaration, not a legally binding treaty: it has no impact on our sovereignty. Canada has always been a champion & example of safe, orderly & regular migration. https://t.co/wfk7VqAKJU

Trudeau said he thinks the Conservative positioning on the Global Compact and the immigration file writ large is dangerous.

“We see a political party going to a place that no mainstream political party in Canada has gone before, which is playing a very, very dangerous game of starting to turn Canadians against immigration,” he said.

He noted the government will continue to discuss with Quebec and the City of Toronto what supports officials there need to handle the influx.

But despite calls for more funding from Ontario Premier Doug Ford, Trudeau said officials there “haven’t been particularly willing to engage with us in these discussions and negotiations.”