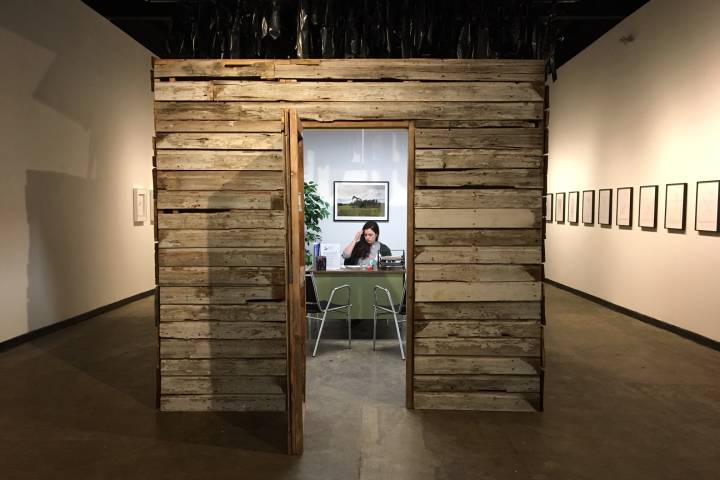 A new exhibition in Edmonton is raising awareness about the issue of orphaned oil and gas wells and creating an interactive, tongue-in-cheek opportunity for people to “adopt” an orphan well.

Orphan wells are oil and gas sites where there is no longer anyone legally responsibility for it. As of Sept. 13, 2018, there were 2,061 orphan wells for abandonment, according to the Orphan Well Association (OWA), an industry-funded group that assumes responsibility for the inactive wells of bankrupt companies.

The Orphan Well Adoption Agency (OWAA) by Alana Bartol is being showcased at Latitude 53, with an adoption agent on site at a makeshift agency every Saturday from 12 to 5 p.m.

“It asks significant questions about the oil and gas industry in Alberta, which is something that obviously affects us all,” said Latitude 53 executive director Michelle Schultz.

Prospective caretakers can fill out an adoption application form at the exhibit.

The exhibition allows attendees to go through an adoption process for one of the thousands of orphan wells in the province. Questions about experience as a caretaker, motivations for adoption and plans to address a well’s behavioural problems are asked by an OWAA representative.

“Oftentimes with these sites, a lot of the considerations are extremely practical, simply about the physical aspects of the sites,” said OWAA representative Haylee Fortin.

“This undertaking has other aspects to it, which is the emotional undertaking, and we need to be sure people are willing to commit to the well.”

The adoption agency includes portraits of orphan wells along with information about remediation and the adoption process.

Fortin said interest in the adoption process has been fairly positive.

“Everyone seems to be interested in becoming a caretaker in some capacity,” she said. “There is some uncertainty because it is a big undertaking, but it is a very thorough process to ensure someone is ready for the emotional commitment to the well.”


READ MORE:
Supreme Court to decide how abandoned oil wells to be handled

Orphan wells will likely remain an issue in Alberta for quite some time, according to a 2017 report by the OWA.

“The increase in orphan properties is expected to continue as there are nearly 30 companies within Alberta’s regulatory jurisdiction that are currently insolvent,” the report read.

Internal documents from the Alberta Energy Regulator show that the cost to clean up the province’s oilpatch may be $260 billion, a number far higher than any amount previously made public by government and industry officials.

The Edmonton show also includes portraits of orphan wells, maps of sites and letters to potential caretakers from the wells themselves.

“Help. I am being dismantled,” one well letter said. “Workers built me and now they lay me to rest, so why am I still here?”

“What the artist intends is — it does create a sense of empathy and maybe a reality that you didn’t know existed,” Schultz said.

“I wasn’t aware there was 2,000 of these abandoned oil and gas wells across Alberta and the various states they were in,” she added. “These are actual wells that do exist but obviously, the artist has then taken them and created a project around this existence.”

Schultz said the exhibition is not about pointing fingers, but rather opening up conversation.

“About what our collective and individual responsibilities are for industry and ideas of remediation and what that might look like,” she said.

“There’s always people who will take things in a certain light or may read this as critical, I guess, of industry. But I think, more importantly, it starts those conversations, which is one of the great things that art can do.”

The exhibition runs until Jan. 26.

– With files from Global News and The Canadian Press