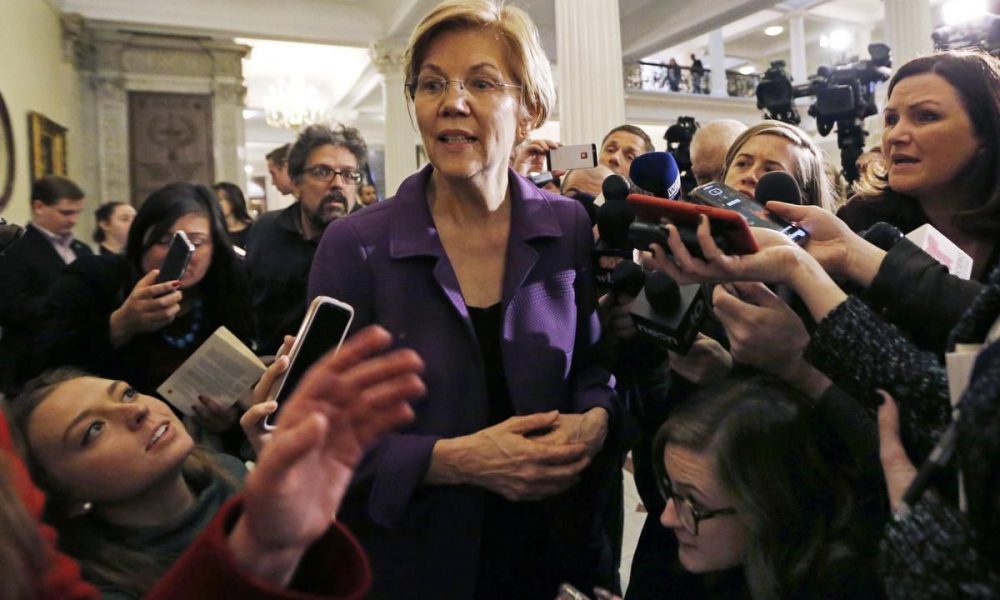 Four years after almost every possible candidate conceded the nomination to a dominant Hillary Clinton, the party is about to have an unpredictable everybody-into-the-pool scrap to be chosen as the candidate to challenge Donald Trump.

Massachusetts Sen. Elizabeth Warren announced this week that she was launching an exploratory committee, which allows her to raise money and hire staff. Former housing secretary Julian Castro has scheduled an announcement for Jan. 12.

Over the next few months, they will be joined by a mix of the party’s who’s-who and who’s-that. The “first debate,” scheduled for June, will almost certainly have to be split into two debates to accommodate the large field.

That field will likely be the most personally diverse ever to seek the presidency, featuring multiple women and people of colour. On policy, the candidates will tend toward the unabashed liberalism now favoured by much of the party’s base — though there will be significant differences in their choices of issue emphasis, in the ways they depart from progressive orthodoxy and in how they approach President Donald Trump.

After two years of relative party unity in fighting Trump’s initiatives, members of the grassroots “resistance” will have to choose an affirmative party identity. They could go any number of ways. The list of prospects includes people known for fiery oratory and for low-key affability, for ideological rigidity and for shape-shifting, for focusing on economic injustice and on racial injustice. It includes champions and skeptics of free trade, advocates and opponents of free college tuition, billionaires and critics of the billionaire class, Washington veterans and relative newcomers.

The leaders in extremely-early opinion polls — which should be treated mostly as measures of how widely the candidates’ names are currently known — are Biden and Sanders. Both have devout fans. But as white men of age 76 and 77, they will be challenged by what seems to be a desire in much of the party base for fresh faces.

In the 2018 midterm elections, Democrats elected a record number of women and people of colour to Congress. “I think that the Democratic electorate is hungry for either a woman or a person of colour,” said Kate Maeder, a party strategist in California.

“You hear the common names, but probably there are probably going to be other names too. So we don’t know. We’ll see,” she said. “We have a spectrum of all thinkers there. It’s too early to decide what type of presidential candidate the Democrats want. Let’s see when they come here: what are going to be the issues, what are they going to offer, what is the message?”

California’s move of its primary to March, from the traditional June, will require candidates to change the way they approach the early months. The nation’s most populous state has long been an afterthought because of how late it came in the process. Now, its racially diverse Democratic electorate will begin casting ballots in early voting on the same February day as the first caucuses are held in the small, heavily white state of Iowa.

Candidates will have to figure out how to establish national personas in a media environment dominated by Trump. And they will have to decide how to navigate the uncompromising mood of an increasingly left-leaning party base while also retaining their viability among the moderates who may decide the general election — and while convincing the base that they are best positioned to beat Trump.

So far, it has been full-speed ahead to the left. Harris, Booker, Gillibrand, Warren and Sanders have all endorsed the idea of a federal jobs guarantee. In 2016, Sanders’s endorsement of single-payer health care, “Medicare for All,” made him a left-wing novelty. In 2020, that position is expected to be a Democratic standard.

Sanders has already won one early victory. After furious complaints from him and his allies, the party voted this summer to sharply limit the power of “superdelegates,” the party elites who previously got to vote for whichever candidate they wanted no matter what regular voters decided.

Strengths in the primary: Personal fondness of most Democrats, reputation for connecting with white working class, association with Barack Obama.

Weaknesses in the primary: Age, error-prone campaign past, past conservative votes, handling of Anita Hill hearing.

Weaknesses: Age, unpopularity among some Clinton devotees, weakness with Black voters, distance from the Democratic party.

Weaknesses: Support for Trump’s trade policy, past allegation of 1980s domestic abuse (by ex-wife who now supports him).

Weaknesses: Centrist decisions as a prosecutor.