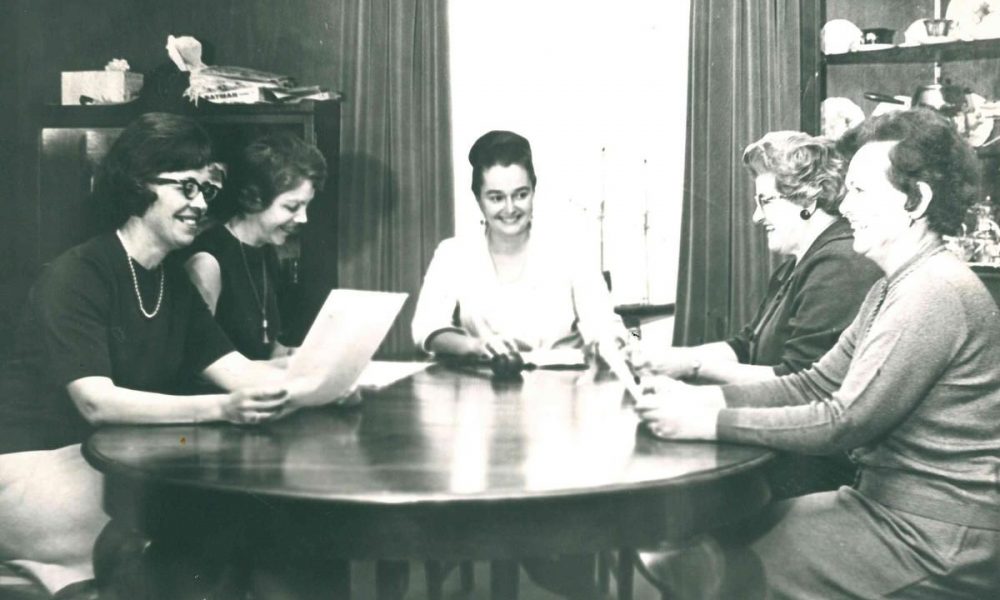 It’s probably a good thing if this comes as a surprise: during last month’s Ontario municipal elections, two small rural communities — the Township of Algonquin Highlands and the town of Spanish — elected new councils comprised entirely of women.

Yawn. Because it’s 2018, right? This shouldn’t even rank as newsworthy.

And as news goes, October’s gender breakthroughs registered as barely a blip: notable marginalia, at best, in an election saga dominated by the provincial government’s dramatic downsizing of Toronto council.

Hold on, though — was this historic? After electing thousands of all-male councils, was this the first time Ontario’s 444 municipalities produced even a single all-female council, let alone two?

The CBC thought so, initially, in a piece proclaiming that “voters in Ontario made history twice by electing two all-female councils.” But it’s not actually true.

Algonquin Highlands Mayor Carol Moffatt, who won re-election only to find herself surrounded by winning council candidates of the same gender, hailed the moment in an interview with CBC Radio’s Ontario Morning.

Moffatt, whose interest in Ontario history predates her mayoralty, didn’t leave it at that. She did some digging and a few days later discovered and shared on Facebook the real facts: Ontario voters had done this once before. It happened in the village of Tweed, in 1967, where a woman by the name of Barbara Allen was elected reeve, leading Canada’s first all-female council.

And in 1967, unlike 2018, it was front-page news, drawing interest from across Canada and beyond. Looking back on the historical coverage today, the stories read like outtakes from an episode of Mad Men.

All the women elected in Tweed now are gone, Allen herself was the last to go, dying in 2008 at age 78. But in an interview with the Star, Allen’s daughters Peggy and Jane delighted in recounting what they saw as teenage girls, 14 and 15, respectively, when reporters came calling, trying to make sense of the women of Tweed.

“It was pandemonium, it was crazy,” said Peggy Allen. “We were just incredibly proud of our mother. She was so cool.

“At the time, reporters wanted to know how she could be the leader of the community and fulfil her obligations as a housewife and a mother,” Peggy said. “And of course her response was, ‘I married a liberated man.’ At the time people were taken aback by that, that she would be so bold. But it was true — our parents had an equal partnership. They were partners in everything they did.”

Peggy and Jane Allen recall one especially vivid encounter with a film crew from the weekly CBC television newsmagazine The Way It Is. “They filmed her doing domestic chores, things like cooking in the kitchen. Mother had long hair that she wore up in a bun, and they actually directed her to take her hair down and brush it for the camera.

“Whatever it was the CBC crew was trying to do had nothing to do with politics,” Peggy said. “We thought it was hilarious, ‘What does this have to do with running the village?’

“It just seems so strange now, looking back, that they would do that. But at the time, people were just so curious — ‘Was she a feminine woman? Was she able to fulfil her motherly, wifely duties?’ ”

The CBC was hardly alone in its skeptical tone. Evan Morton, curator of the Tweed Heritage Centre, has a file thick with comparably dubious clips from the Star, the Globe, the Kingston Whig-Standard, the Peterborough Examiner, the Belleville Intelligencer, the Hamilton Spectator and TV outlets across the country.

But the file in the Tweed museum has gaps. Some of the stories reference coverage of the gender breakthrough in the U.S., Scandinavia and Russia — but the actual clips from foreign sources are missing. Another curiosity in that file is a the lyric sheet for a song titled “Town Council Election” — written and recorded by Tweed musicians in honour of the occasion with a notation indicating it was “Written for The Way It Is (CBC) — aired on Dec. 10, 1967.” Morton hopes the retelling of this story will lead him to access a copy of the program for the museum.

“Away down east there’s a village called Tweed,” the song begins. “With a female reeve that’s unique indeed. She leads the town with grace and ease. Barbara Allen’s the lady, the reeve of Tweed.”

Morton, the curator, has a personal connection to the story: his father, Garrett Morton, served for a whopping 50 years as clerk-treasurer of the village of Tweed. That’s Morton’s late father in the photo with this article, administering the oath of office to the all-female council in 1967. He and many other older residents would have remembered a time before 1921, when women won the right to vote in Canada.

“My dad always said they were a good council — as good or better than any other council we had,” Morton told the Star. “But you look through the file today and you realize just how much scrutiny there was.

“What I remember is that Barbara Allen spoke her mind. She was well-educated. She was ahead of her time, probably more liberated than some of the other women, and definitely more than many of the men.”

What Allen’s daughters also remember are plenty of jokes, many of them cruel.

Though she won re-election multiple times, ultimately serving as reeve for more than a decade, men who ran against her found themselves anonymously harassed, presumably by other men. In one instance, one of Allen’s male political rivals received a pair of panties in the mail, said Peggy Allen.

“One of the elements of the job was to go on-site to survey construction of public works. And when Mother arrived for one of the first inspections, the crew gave her a hard hat that was decorated with hippie flowers.

“She was a good sport about it. She never responded negatively to any of those things. She laughed right along with them and said, ‘You want me to wear the hard hat, I’ll wear the hard hat — and just maybe I’ll add a few peacock feathers to it.”

Education, Jane Allen said, is what motivated their mother to run. Already a graduate of nursing when she started her family, Barbara Allen earned a bachelor’s degree during the early ’60s, commuting part-time an hour each way on the back roads from Tweed to Queen’s University in Kingston. Her education continued even after her decade as reeve: she eventually earned a master’s in neural linguistics and, at age 65, a PhD in sociology.

“The really big battle for mother was the long and bitter fight over closing local high schools and the amalgamation of school boards,” said Peggy Allen. “Tweed was so proud of its high school and rightly so. But in the ’60s the trend was all about centralization, with smaller high schools closing and students being shifted into buses to travel to bigger regional schools.

“She was up against the idea of bigger is better, which was starting to change the face of rural Ontario. It was a huge battle and it ended in 1970, sadly, when Tweed’s high school was closed.”

Allen’s daughters, after initial contact with the Star, read up on the coverage of last month’s election results. They extend empathy to Algonquin Highlands Mayor Moffatt and the other newly election female councillors, who, in the flurry of responses to their breakthrough, have encountered a handful of social media trolls. Among the cruel messages in circulation is, “Congratulations on your coven.”

Said Peggy Allen: “That kind of cruel joking was not uncommon in my mother’s day and sadly, it’s still not uncommon. I think the obvious difference today is clearly the large majority sees this as something to celebrate, and that clearly wasn’t the case in 1967.

“But the other difference is there was no social media in 1967 to amplify the angry few when they put a very nasty negative spin on things.”

Moffatt, in response, seems inclined not to feed the trolls by saying much about them. But she is clearly moved by the accounts from Tweed, circa 1967, and what the women there endured.

“The Tweed story is funny and sad at the same time,” she said. “In 1967 it clearly was acceptable to question the motives, abilities and priorities of women — and that just goes to show how things have changed,” said Moffatt.

But, she added, things “have to keep changing — moving forward in hopes of a time when we’re all just ‘people’ who are elected.”

Allen’s daughters, for their part, produced one especially important trove of letters to help tell this story — personal correspondence from the early 1970s between their mother, Barbara, and famed Chatelaine editor Doris Anderson. Any Canadians who have ever heard the phrase #metoo and are unaware of Anderson owe it to themselves to learn about her.

Placed alongside the Mad Men coverage of the women of Tweed, Chatelaine’s letters to Allen are a clarion call to stand higher still with a run for federal office.

“At the moment, there is exactly one woman member out of 264 federal members of Parliament,” wrote Anderson in the opening salvo of June 10, 1971. “We want to do something concrete about the imbalance and we are asking you and other outstanding women across Canada to join us.”

Anderson, who doubled Chatelaine’s circulation during her tenure as editor, placing the magazine on the front lines of the Canadian feminist movement, earned a cautious response. Allen felt she had already defied all possible odds, writing, “It has taken 10 years to prove to people locally that I, not just women in general, can perform satisfactorily. In fact, my endurance locally in the heart of conservative Hastings County (the small ‘c’ is deliberate) is somewhat of a minor miracle.”

The Chatelaine letters — the recruitment for higher office — continue. Allen takes up the challenge with a growing sense of excitement, feeling out a potential federal run. She discovers she actually has an excellent chance of entering Parliament, given the broad support throughout the community.

But in the end, Allen begs off. Not for lack of ambition or will to bring change. But because, as she says in her final letter to Chatelaine, in the summer of 1972, “I love being the Reeve of Tweed and deep down in my heart, don’t want to be anything else. At least not for a while.

“So I backtracked and thanked all my friends for their kind words and encouragement. And here I am back at square one. I hope you don’t think I’m a chicken because, believe me, the second decision took far more courage than the first.”