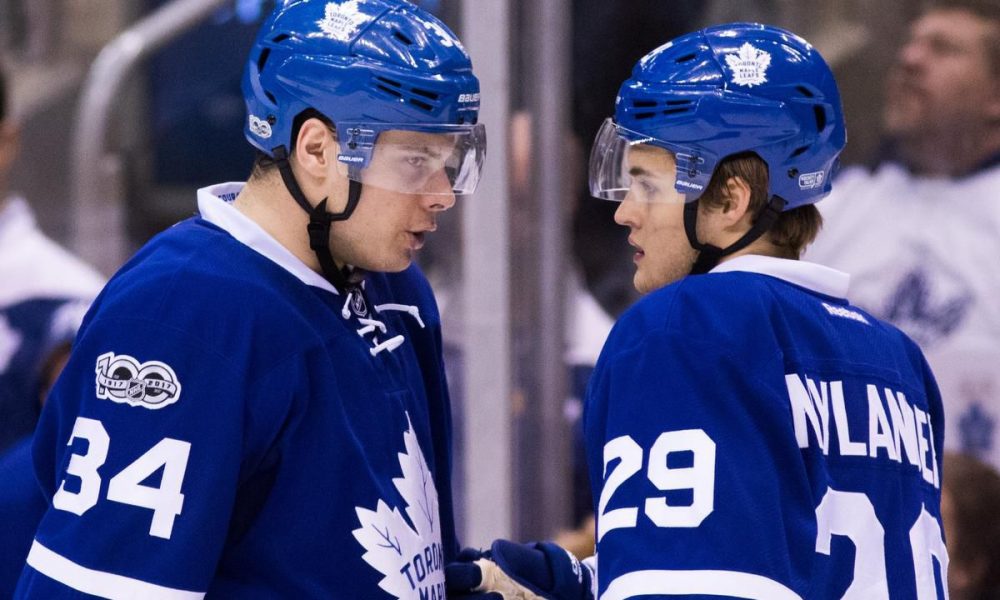 ST. PAUL, MINN.—When Morgan Rielly heard that teammate William Nylander broke a contract impasse with a phone call to Maple Leafs GM Kyle Dubas just a half-hour before the signing deadline, and that the final documents were delivered with only minutes to go, he laughed.

“That’s classic Willie,” said Rielly. “We were joking that he was probably sleeping or something. Love him. He’s calm, collected.”

The first busload of Leafs arrived at the Xcel Energy Center for their Saturday night game in Minnesota, it turned out, just when Nylander called Dubas to work out a deal with the clock ticking toward the 5 p.m. Eastern deadline.

Nylander’s teammates were just as on edge as any Leaf fan, and Dubas himself.

“We got their signed copy of the contract back at 3:52 Central time (4:52 p.m. Eastern),” said Dubas. “It was agreed to, but there were some slight variations that needed to be made and sent, emailed over there, sent back in the right order and send it to the league.

Dubas told his staff: six years with a salary-cap hit of $6.97 million (all dollars U.S.) in years two through six, when the cap crunch could hurt.

“I talked to William throughout,” said Dubas. “Obviously we met throughout, talked on the phone, texted, stayed in touch. I know people made it seem contentious, and at points maybe it was, but once he gets back here and gets rolling it’ll all be gone. We’re thrilled to have him back.”

“We had our media guys checking in and we were annoying probably, asking for updates,” said Rielly. “I was with Steve and he was on his computer, and I looked at the words he was typing (for the press release announcing the deal). So I sprinted to the room to tell them I know what happened — and I didn’t tell anybody.”

“Babs popped out of the office and said ‘We signed him,’” said Marner. “And then, of course, everyone nowadays just goes right to our phone. So about 20 of us walk over, grab our phones. Next thing you know, you see the signing.”

Teammates were texting Nylander as well as friends and family. “I texted him right away, said ‘Congrats,’” said Marner.

It was night-time in Sweden when it was all over.

“It was nice to just lay down and get some sleep for once when everything was over,” Nylander told Sportbladet on Sunday at Arlanda Airport in Stockholm). “It’s been a sick process, but now I’m just happy to go back there and get to play.”

He’s expected back at practice on Monday, but when he plays is another question. The best guess is that he’ll be ready for Saturday’s contest in Boston.

Rielly knows better than most about what Nylander was going through. The defenceman signed a six-year, $30-million extension at the end of the 2015-16 season after elongated talks with then-GM Lou Lamoriello.

“It’s good peace of mind to know you don’t have to do it again for another couple of years,” Rielly said of the long-term deal. “It’s not enjoyable. That’s the biggest misunderstanding. It’s not at all comfortable.

“It was happening over the course of the year … and I didn’t enjoy it. For him, I’m sure he wasn’t enjoying it. He just wants to play. I’m sure he’s going to be happy to come home, be excited, and hopefully he can put the puck in the net.”

Centre Auston Matthews, who missed a month with a shoulder injury, said it would take Nylander a bit of time to get into real game shape.

“It’s the same thing coming back from injury,” said Matthews. “You need a couple of games to get going. I’m sure he’s excited to get going.”

Marner was a bit more optimistic.

“That guy’s a freak, the stuff he does on the ice. I’m sure he’s been keeping up (fitness-wise) in Sweden.

“He’s a big part of this team. Having him back is going to add more fire to this team and make us even deeper.” 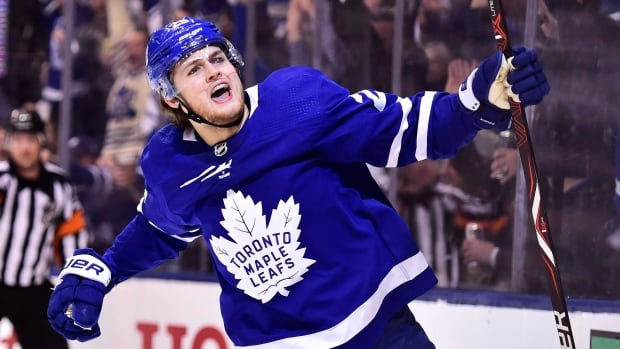 William Nylander’s contract impasse has finally come to an end.

The restricted free agent signed a six-year deal with the Toronto Maple Leafs on Saturday, just before the 5 p.m. ET deadline. The Leafs announced that the extension will pay Nylander an average of $6.9 million US per year from the second to sixth years and $10.2 million this season.

The agreement brings an end to nearly five months of negotiations between first-year general manager Kyle Dubas and Nylander’s representatives, agent Lewis Gross and his father Michael, who played for seven NHL teams and was traded five times in his career.

« I need to look out for myself and make the decisions me and my agent believe are the correct ones, » Nylander told Swedish newspaper Aftonbladet in early October. « I need to think long-term. It’s my future we’re talking about here. »

Forward Mike Peca was the most recent player to sit out an entire season due to a contract dispute, missing the 2000-01 campaign with the Buffalo Sabres at age 26.

As the Nylander signing deadline approached, it’s believed the Maple Leafs were willing to let it pass rather than meet the player’s reported demand of a long-term deal with an annual average value in the $8 million range.

Dubas, whose offer was said to be around $6 million, seemed to have the leverage in talks, given the team’s impressive 18-8-0 record this season and the emergence of 22-year-old winger Kasperi Kapanen, the former fourth-liner who replaced Nylander on the right side on a line with Auston Matthews earlier this season.

Nylander’s arrival after sitting out 26 games may or may not mean the end of Kapanen’s time skating alongside Matthews, who returned to the lineup on Wednesday after sitting over a month with an injured left shoulder. Kapanen and Nylander have been best friends and roommates since joining the Toronto Marlies, the Leafs’ American Hockey League affiliate, during the 2015-16 season.

« Everyone wants Willie to be here, » Kapanen told reporters in October. « He’s a big part of the team. He brings a lot of energy and a lot of offence to our team. »

In recent weeks, Maple Leafs head coach Mike Babcock has watched as others have stepped up to fill the scoring void – namely Nazem Kadri, Patrick Marleau and Andreas Johansson – after John Tavares, Morgan Rielly, Mitch Marner and Matthews handled the bulk of scoring early on.

Dubas stated weeks ago he wasn’t worried about getting Nylander signed and insisted he wasn’t shopping the talented Swede to any of the league’s other 30 teams. However, he did have assistant GMs Brandon Pridham and Laurence Gilman in tow during the team’s recent road trip through Raleigh, N.C., where the Hurricanes had been linked to Nylander trade rumours. 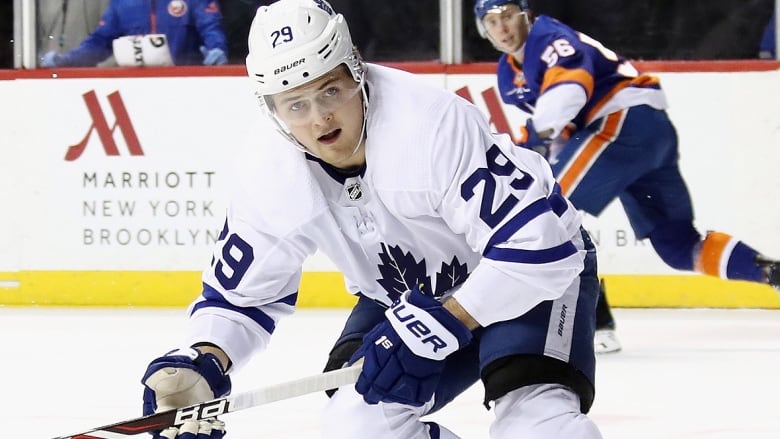 Nylander is coming off back-to-back 61-point seasons. In 185 NHL regular-season games, he was scored 48 goals and 135 points. (Bruce Bennett/Getty Images)

Kadri, who has scored 32 goals in each of the last two seasons, had to wait until the eve of training camp in September 2013 before signing his two-year, $5.8-million bridge deal on the heels of an 18-goal, 44-point performance in the lockout-shortened campaign.

« It’s a little bit stressful, » Kadri, who inked a six-year, $27-million extension in April 2016, told Sportsnet in September. « It’s not the easiest thing to go through. [Nylander] is a great player, he’s a great teammate and we love to have him around. »

Nylander has 48 goals and 135 points in 185 NHL regular-season games. During the stalemate, his on-ice contributions were often compared to Winnipeg’s Nik Ehlers ($6 million AAV) and fellow forward David Pastrnak of the Boston Bruins ($6.7 million).

Ehlers scored 60 points in his age-21 season and signed for seven years and $42 million while Pastrnak, who played with Nylander as teenagers in Sweden, recorded 80 points at 21.

In early October, Maple Leafs president Brendan Shanahan said the team’s young players should consider accepting less money to provide the best chance for the franchise to win its first Stanley Cup since 1967.

Matthews and Marner are pending RFAs but Dubas has made it clear they, along with Nylander, would spend the prime years of their NHL career in Toronto, no matter the term of their contracts.

Many expect Matthews to command a salary similar to Edmonton Oilers captain Connor McDavid’s $12.5 million AAV while Marner, the Leafs’ top point-getter this season with 36 in 26 games, may ask for something in the range of Jack Eichel’s $10 million AAV as the Sabres standout has 32 points in 27 contests. 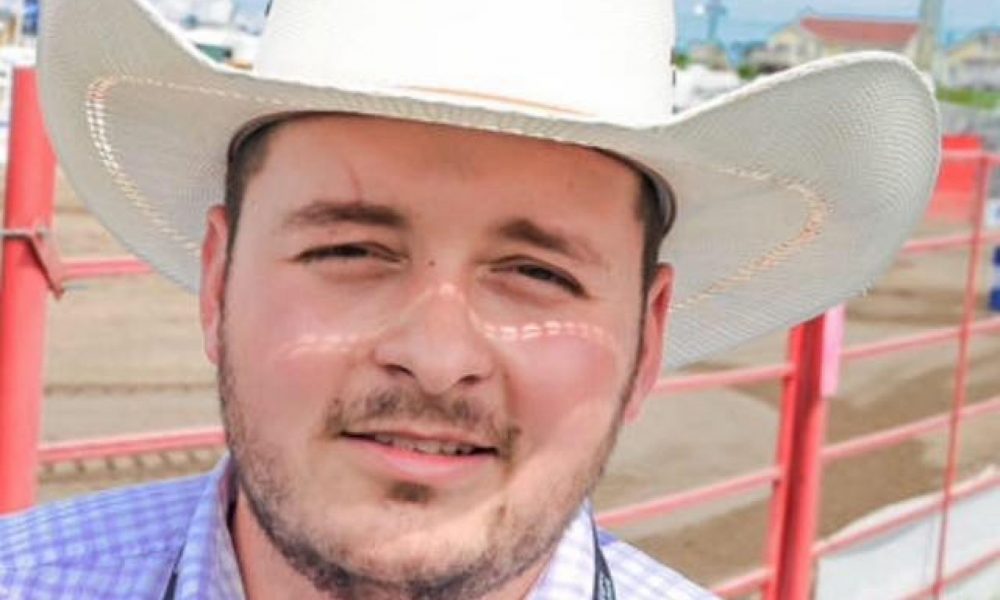