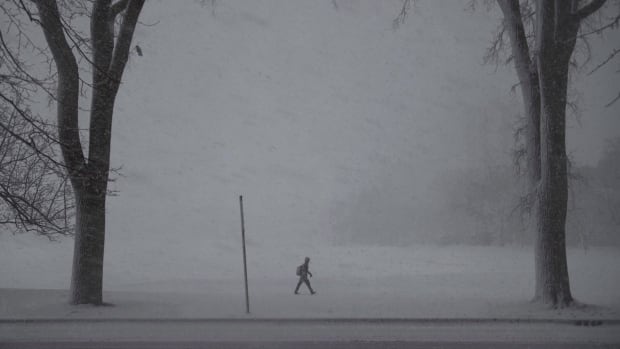 A winter storm is hitting the Maritimes with blowing winds, freezing rain, snow and rain expected through the day, with as much as 40 centimetres of snow in northern parts of New Brunswick.

Environment Canada has issued winter storm warnings for all of New Brunswick and western P.E.I. There are rain and wind warnings in effect across Nova Scotia but snow is expected before the transition to rain happens later in the day.

CBC meteorologist Tina Simpkin said warmer air Sunday afternoon will transform snow to ice pellets and freezing rain in southern New Brunswick, the eastern half of P.E.I. and all of Nova Scotia.

Simpkin said most of mainland Nova Scotia will see five to 10 cm of snow, mixed with some ice pellets, before 10 to 15 millimetres of rain later on Sunday. An additional 30 to 40 mm of rain is expected tonight.

Cape Breton will see the storm arrive later in the day with heavy downpours resulting in about 25 mm of rain tonight, she said.

Southeastern parts of New Brunswick and P.E.I. will also see five to 15 cm of snow and ice pellets before the changeover, which wlll include freezing rain before about 20 mm of rain, Simpkin said.

High winds will peak tonight with gusts up to 90 to 100 km/h in parts of the Maritimes, she said.

Environment Canada warns localized and flash flooding could cause water to pool on roads.

Airlines have issued travel advisories for aiports in all three Maritime provinces. Flights at some airports are already affected.

The high winds are expected to create rough seas. Marine Atlantic is planning to sail ealier than usual this morning between North Sydney, N.S., and Port Aux Basques, N.L., to try to keep ahead of the messy weather.

Bay Ferries has cancelled its crossings.

The Confederation Bridge expects to start restricting traffic at noon.

The weather system is expected to continue well into Monday. 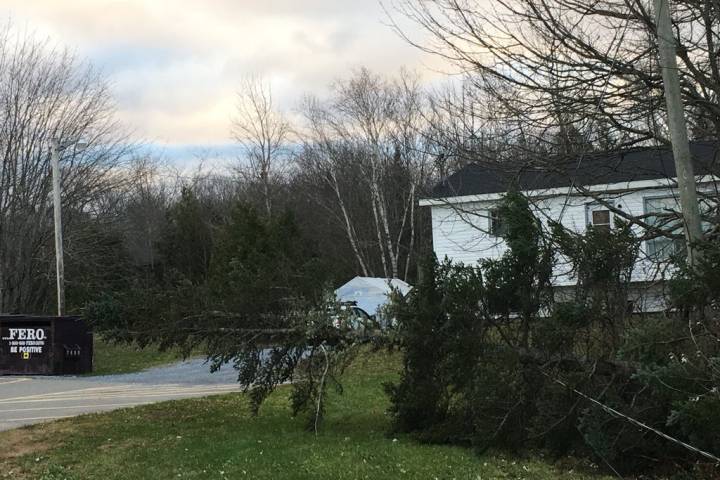 Tens of thousand of people across the Maritimes are without power this morning after the region was lashed by strong winds and heavy rain.

New Brunswick has been the hardest hit, with NB Power reporting more than 94,000 customers in the dark after 100 km/h winds swept across the province Saturday and into today.

READ MORE: Wind, rainfall warnings in effect for much of the Maritimes

Wind warnings had been posted Saturday and Environment Canada said parts of the province could also expect 15 millimetres of rain.

High winds have caused widespread outages across #NB. Damage Assessment is currently in progress. Winds remain an issue. Restoration efforts have begun and may exceed 24 hours in some areas. Please make appropriate plans to keep your family safe. pic.twitter.com/DU9pNJRK4T

Nova Scotia, where wind and rain warnings were also posted, was hit with similar strength gusts overnight and into this morning along the Fundy coast and over northern sections of Cape Breton.

Nova Scotia Power reported this morning that more than 18,000 of its customers were waiting to be reconnected.

All of Prince Edward Island was under a wind warning Saturday and by this morning more than 3,000 Maritime Electric customers were without power.