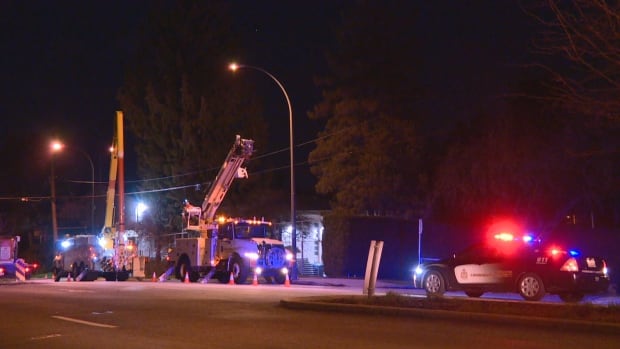 Thousands of people living on B.C.’s South Coast could be without power for days after an intense windstorm hammered the region all day Thursday, possibly turning deadly on Vancouver Island.

Environment Canada said gusts hit up to 100 km/h across Metro Vancouver, Vancouver Island and the Fraser Valley. At one point, more than 330,000 people were without power.

As of early Friday morning, BC Hydro said 150,000 customers were still in the dark.

More than 230,000 homes have lost power as another « significant » windstorm batters B.C.’s South Coast, also leading to widespread ferry closures and shutting down access to parts of Vancouver’s Stanley Park for the sake of public safety. 2:07

The utility called it « one of the most severe storms BC Hydro has experienced in years, » adding that it could be days before power is fully restored to everyone. 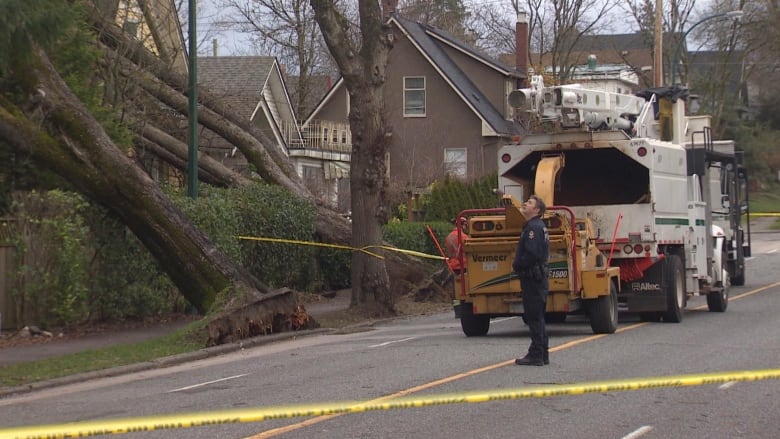 A Vancouver police officer looks up at a tree that fell onto a house in Vancouver on Thursday. (CBC)

A tweet from the utility said hydro workers made progress on outages across the mainland, but the brunt of the damage was taken by Vancouver Island. Crews are being sent to the island on ferries Friday morning to get to the hardest-hit spots.

In many areas we still need to complete damage assessments to have a better understanding of the repairs needed and the restoration efforts. Crews will be working around the clock until we have everyone back on. <a href= »https://twitter.com/hashtag/BCStorm?src=hash&amp;ref_src=twsrc%5Etfw »>#BCStorm</a>

One killed, another injured

The BC Coroners Service said a person was killed by a falling tree in the city of Duncan on southern Vancouver Island, though it is unclear if the tree fell because of the strong winds.

In Surrey, a worker was hurt when a tree went down near Pacific Academy school. They were taken to hospital and WorkSafeBC is investigating the incident.

In White Rock, about 50 kilometres from Vancouver, the city’s landmark pier was partly destroyed by powerful waves.

Video from the shoreline shows waves ripping out a large section of the 104-year-old structure, leaving a man trapped on the far end. He was later rescued by helicopter.

Nearly two dozen boats were also clobbered by the waves, crashing into each other along the pier. The entire beach promenade — a well-known tourist hotspot in the summer — was littered with debris tossed up by the ocean.

The waves in White Rock also cut rail service that runs along its shoreline.

Amtrak passenger service to Seattle has been cancelled, along with up to 17 freight trains that run along that route every day. 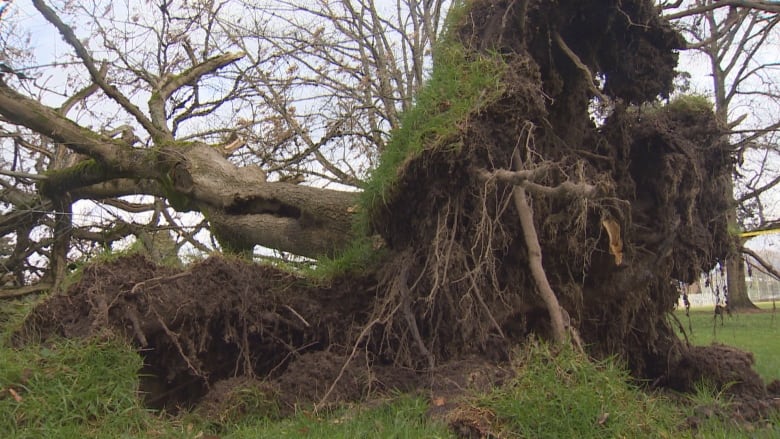 This is one of many trees uprooted by the windstorm in southwestern B.C. on Thursday. (CBC)

Melonas said there are problem areas all through to Bellingham, Wash.

The storm also forced the closure of several public parks back in B.C., including Vancouver’s Stanley Park, out of concern for public safety.

Several public trails and viewpoints leading to the beach in South Surrey and White Rock were also shut down. 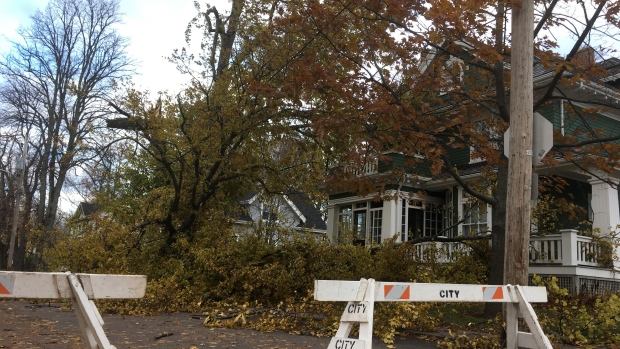 Thousands of people across the Maritimes are without power after a windstorm swept across the region on Saturday.

Winds over 110 km/h hour knocked out power to 92,000 households in New Brunswick.

Over 18,000 customers in Nova Scotia and 3,000 in Prince Edward Island are also waking up without power on Sunday.

Many have been without power since Saturday evening.

Over 200 Nova Scotia Power staff are working across the province to assess the damage, said spokesperson Tiffany Chase. Chase did not have an estimate for power restoration.

The Confederation Bridge is closed to high-sided vehicles, RVs, buses and motorcycles due to high wind speeds.

Concerns over wind also closed the Trans-Canada Highway in New Brunswick near the Tantramar Marsh on Saturday night.

The highway has since re-opened, but the transportation department is asking drivers to stay off the road if they can.

Part of Barrington Street in Halifax was closed on Saturday night after debris flew off a building under construction. The street has since re-opened.

Winds remain strong in Newfoundland and Labrador, with gusts in parts of the region as high as 115 km/h.

Ferry service across the region is cancelled.