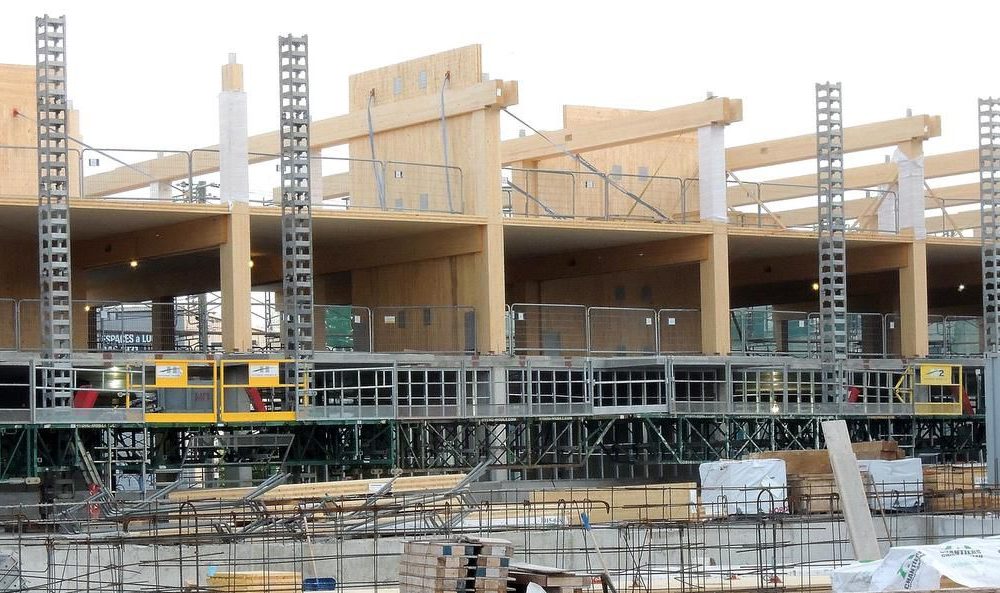 From the outside, the construction project underway at 80 Atlantic Ave. in Liberty Village looks like your typical new office building.

But peer through the large spaces where windows will soon be installed and you’ll notice that above the ground floor there is wood everywhere — walls, ceilings, support beams. Only the underground parking, ground floor and elevator core are concrete and steel.

Designed by Toronto architectural firm Quadrangle, the soon to be completed five-storey office and retail project is a rarity in Toronto — most buildings in the city are still made entirely of concrete and steel.

Like Sidewalk Labs’s proposal to build a high tech neighbourhood in Toronto, with thousands of condominium and apartment units built with timber, the subject of wood buildings is creating a buzz.

Canada already has the world’s tallest wooden building — Tallwood House, an 18-storey student residence at the University of British Columbia — and there are wood structures in Europe and the U.S.

Proponents tout the environmental and esthetic benefits of using the product, but some builders say there are challenges.

“There are many additional things you don’t foresee when you start one of these projects,” said Marc-André Roy, president of Sotramont, a Montreal-based developer that’s one of four partners working on Arbora, a massive mixed-use project made primarily from wood.

“It is much more work,” Roy said in an interview. “We’re doing something new. It took more energy and man hours to get through everything … it’s more complicated.”

The wood used for Arbora is cross-laminated timber (CLT) a product made by gluing wood panels in an angled manner that provides stability and force. The panels are said to be as strong as concrete but five times lighter, making them ideal for floors and load-bearing walls.

But while it may be lighter, there’s debate about whether wood construction is actually cheaper.

He added, however, that “cost savings in timber construction are highly dependent on the local construction market, the readiness of bidders and trades to adapt to new methods,” and the ability of those involved to feel confident taking risks with an unfamiliar product.

Aly Damji, a senior vice-president with Toronto-based developer Hullmark, said the cost of using wood was “generally … on par with concrete and steel” for the 80 Atlantic project.

“Our construction estimates priced in the learning curve,” Damji said. “Contingency was built into co-ordinating how our consultants, architects, as well as our structural, mechanical and electrical engineers, would be able to co-ordinate with wood.”

But others take a harder view of wood’s costs in construction.

“It’s not cheaper,” said Annie Lemieux, president of developer LSR GesDev, which is also a partner in the $150-million Arbora project. “Wood ends up costing more than concrete because it’s more complicated and people don’t know how it works.”

Roy said an example of that complexity is the tubes (or “sleeves”) that are usually built into concrete walls for plumbing.

“You don’t put sleeves in wood because (the wood) comes in a slab, pre-made, so you have to bore holes in the wood,” he said.

“You can say, ‘That’s easier, it’s wood’— in theory, yes. But in practice, nobody has experience doing that, so I have to get a guy to bore holes using a special drill. It’s done by a carpenter who, in theory, doesn’t usually do that.”

Another challenge is the assumption that wood will burn faster. Roy says fire testing has been done on wood buildings in Canada to ensure their safety, and notes that there are also fire risks associated with concrete and steel.

“A solid piece of wood will char, but not burn. If you remove the charring you’ll still have a solid structure,” he said. “With a fire in a concrete building, there are rods in the concrete that will dilate and make the concrete explode. With steel, the fire makes it melt.”

In theory, wood buildings should be quicker to construct because the product arrives prefabricated — unlike concrete, which takes time to form on site.

But acquiring wood products can be an issue because there aren’t many companies that supply it for big projects. A director for Timmerman Timberworks, which is located near Barrie and is providing wood for the 80 Atlantic project, said the firm needs more than six to eight weeks lead time to get the product to a builder.

Despite those challenges, proponents of wood tout its esthetics, as well as the environmental benefits of using a product that “sequesters” carbon dioxide.

Damji said Hullmark went with wood for 80 Atlantic after the Ontario Building Code was changed in 2015 to allow wood frame structures as tall as six storeys from the previous four. He said the decision was based on the notion the product would bring something “unique” to the market and lure prospective tenants from the standard highrise towers on King St.

Spaces, a workspace provider, and Universal Music are among those set to move into 80 Atlantic when it’s finished later this year, along with Jackman Reinvents, a management consulting, design and branding agency.

Jackman Reinvents CEO Joe Jackman said 80 Atlantic will offer his business a “sustainable and healthful place in terms of construction and specification.”

In Montreal, Arbora’s three eight-storey towers are being built in Griffintown, a hip community where the sustainable and innovative nature of wood construction is appreciated, say Roy and Lemieux.

That’s key to projects like this succeeding, they argue.

“The wood environment is very calming compared to other projects made of concrete. These residents want that,” Lemieux said.

“So for this location and clientele, this works well.” Roy added.

And as for the future of wood buildings?

“As it becomes more mainstream, perhaps it will compete with steel and concrete,” Roy said. “But to penetrate the market. you’ll need a competitive advantage.”