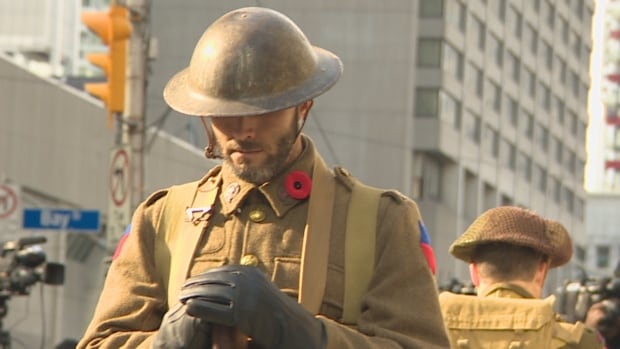 Toronto marked 100 years since the end of the First World War with a Remembrance Day ceremony at the cenotaph at Old City Hall on Sunday.

An estimated 7,000 people gathered downtown to observe two minutes of silence in honour of Canadians who have served and those currently in uniform.

Mayor John Tory told the crowd gathered in the November cold that this Remembrance Day is particularly notable given the centenary of an armistice that ended a desperate, bloody war.

« They’re all special, but this one, I think, is particularly special, » Tory said.

The mayor noted about 45,000 people from Toronto served in the Canadian Expeditionary Force or in the British Army overseas during the First World War. 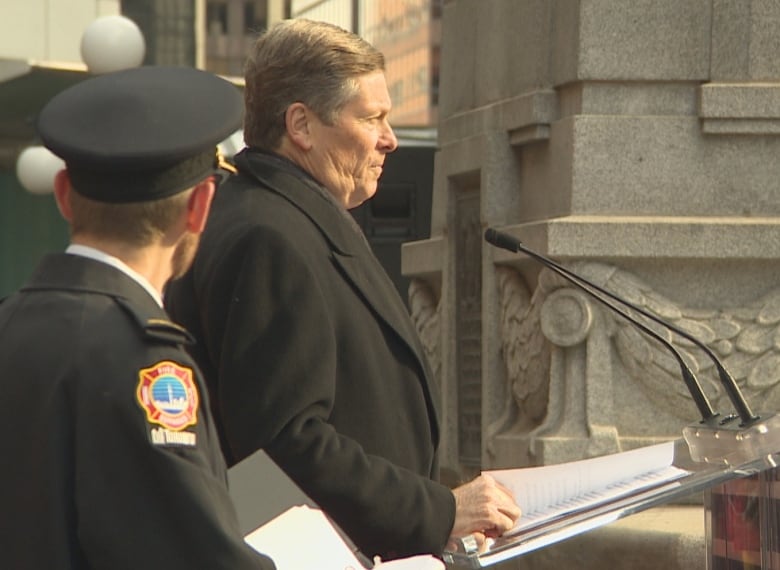 Mayor John Tory told thousands gathered at Old City Hall for Remembrance Day: ‘We have not forgotten them and we will not forget any woman or man who does their duty for Canada.’ (CBC)

« One hundred years ago, the guns fell silent in Europe. Here in Toronto, a city that had been so focused on supporting the war effort, the streets were filled with celebrations. »

By the end of the war, more than three-quarters of eligible men from Toronto had volunteered to serve, he added.

« For so many here in Toronto, Nov. 11, 1918, would have been a day where, after years of bad, awful, continuous heart-wrenching news, there was finally some good news. »

Remember what they fought for, Tory says

The First World War, however, took its toll, he said. Thousands died, and of the thousands who returned home, many were « broken, » injured physically and mentally. According to the Canadian War Museum, close to 61,000 Canadians were killed during the conflict.

« We have not forgotten them and we will not forget any woman or man who does their duty for Canada, » Tory said. 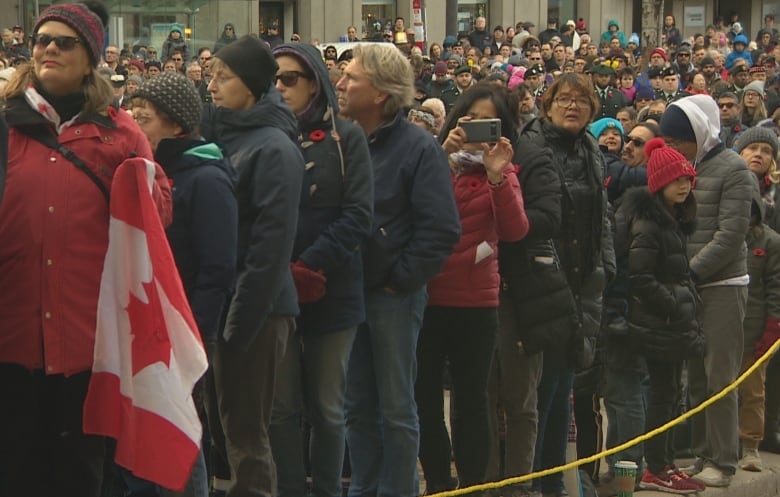 History is filled with examples of the « perils » of forgetting about the past, he continued. Remembrance Day, in particular, is a reminder that the values for which veterans fought so hard cannot be taken for granted.

« Now more than ever, that way of life must continue to include respect for each other, acceptance of each other, the freedom to be who you are — that was what a big part of the sacrifice was about. »

Remembrance Day is not just about one day, he added, and it resonates today, given ongoing conflicts around the world.

« The greatest act of respect and remembrance we could perform in honour of those we lost in all of the wars would be to stand up against a seemingly growing tide of polarization, and far too often, outright hatred. » 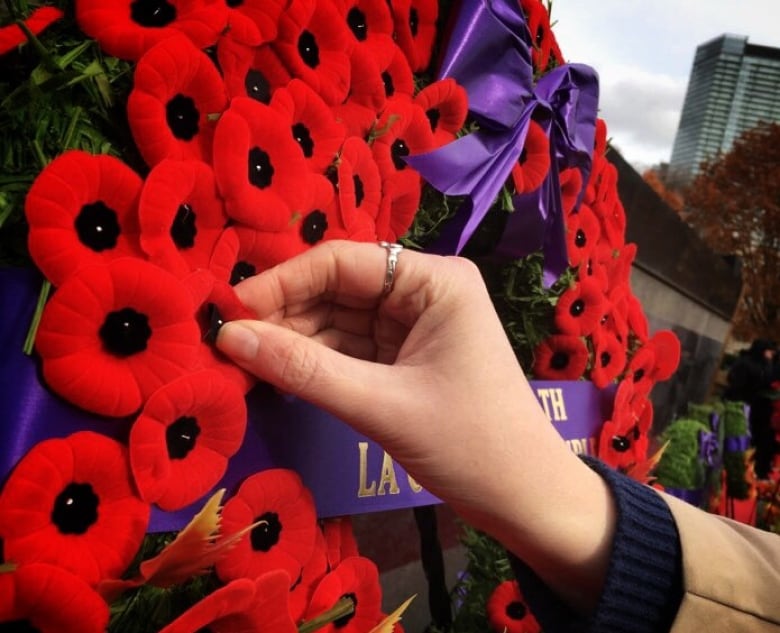 A person pins a poppy on a wreath at Queen’s Park on Sunday. (James Morrison-Collalto/CBC)

His comments were followed by Hymn to Freedom and a reading of the iconic Canadian poem In Flanders Fields. Later, Tory laid the first wreath at the cenotaph.

Other politicians, representatives of several Toronto government agencies and members of non-profit organizations joined him in laying wreaths.

Meanwhile, at another ceremony of Queen’s Park, Ontario Premier Doug Ford encouraged Canadians to remember soldiers past and present as they reflect on the centennial anniversary of the end of the First World War.

Ford told a crowd assembled in front of the provincial legislature that « Canadian heroes span every conflict and every generation. » 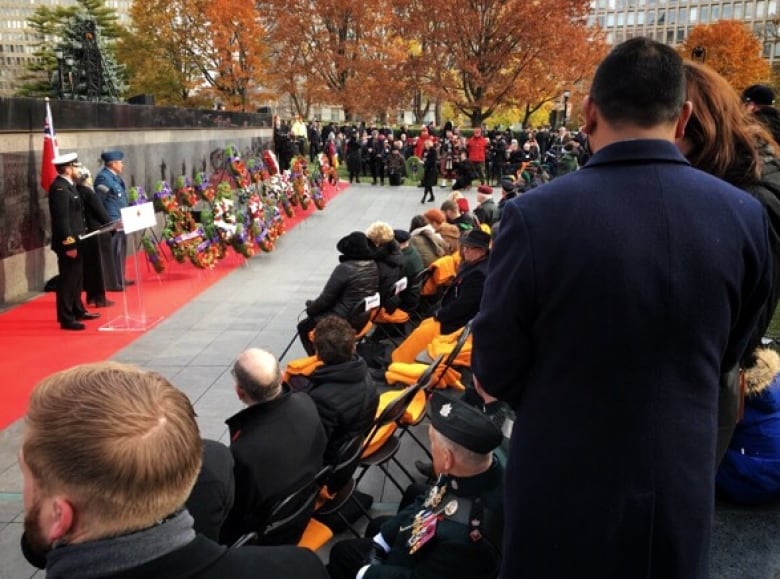 The two ceremonies in Toronto were among dozens held across the province. (James Morrison-Collalto/CBC )

The two ceremonies in Toronto were among dozens held at legions, cenotaphs and churches across the province.

Ford said his government is doing « what we can » to make veterans lives a little easier.

He said that includes planned legislation that would « ease the burden » on Ontario’s Royal Canadian Legion halls by ensuring they pay no property tax. 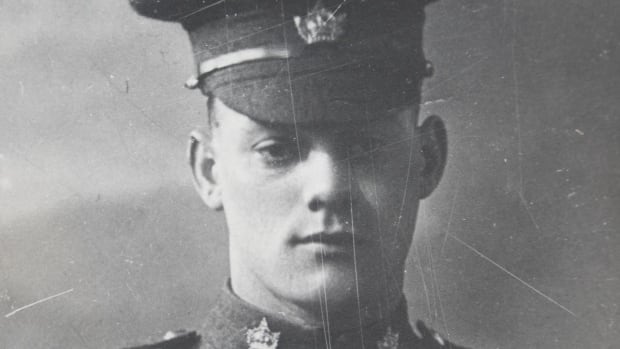 George Lawrence Price died on a Monday. It was a rainy day whose hours were almost evenly split between war and peace. And it was a terrible day to die.

That Monday marked both the end of the long suffering of the First World War, and of the Canadian private’s short life. His premature death, just minutes shy of a tenuous peace, was no more or less tragic than that of countless others killed during the course of the war — or afterward, because of it.

But being the last Canadian and Commonwealth soldier to die in the war to end all wars — just as so many people were celebrating — lifted him out of almost-certain anonymity.

His death on Nov. 11, 1918, ultimately made him a symbol of the futility of conflict. 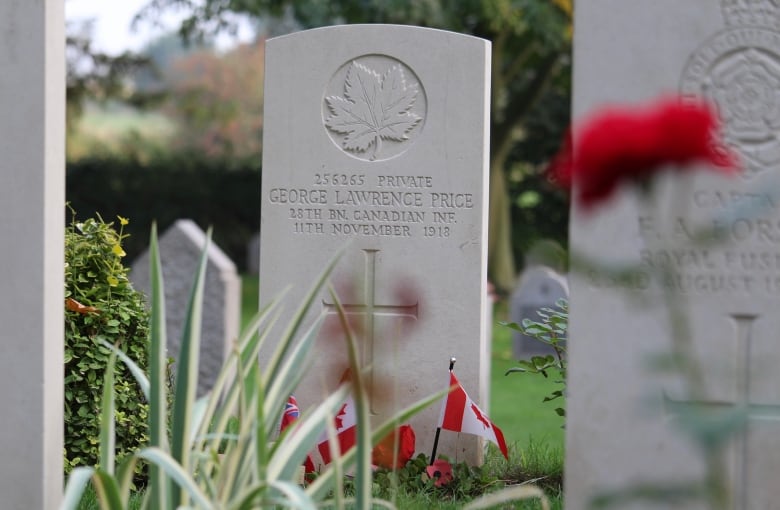 Before all that, George Price, the civilian, lived an unremarkable life.

Son of Annie and James Price, he grew up in what is now Port Williams, N.S. As a young man, he moved west, ending up for a time with Canadian Pacific Railway in Moose Jaw, Sask.

He made headlines there for an unfortunate aside: Stealing « a quantity of house effects, » including dishes and linen, from his landlady. The value of the goods? A then-significant $25. He served one month in prison with hard labour.

It was also there that he joined the army. As a soldier in the 28th North West Battalion, Price served in the thick of the Canadian effort leading to the end of the war, according to Tim Cook, author and historian at the Canadian War Museum.

« He served throughout the Hundred Days campaign, » said Cook, in reference to a series of successful Canadian battles in which they suffered heavy casualties.

According to his personnel record, Price was also hospitalized for a month after a gas attack in France.

The Canadian soldiers who made it to the end were « exhausted, » said Cook. « They had seen their comrades, their best friends killed. They had buried them in shallow graves. »

Like many around him on that Monday, Price was a conscripted soldier — drafted at 24, and without a wife or children. He wrote home diligently, sending stoic and hopeful postcards to his little sister, Florence.

In his letters to his mother, Price revealed he was a reluctant warrior.

Early Monday, the Canadians had just taken the Belgian village of Havré, on the outskirts of the newly liberated Mons, a city that still today remembers both Canadians and Price for their sacrifices.

At 6:30 a.m. that Monday, the Canadian Corps received official word telling them the fighting would stop that day — an armistice that would come at 11 that morning.

Most of the units would have heard by runner or telegram by 9:30 a.m., Cook said.

« They had about two hours to know that the war would be over. And most of the officers simply said to the soldiers … ‘Find a hole in the ground and stay there. Don’t expose yourself, don’t endanger your life,' » he said.

« They understood that this was the end of a very long and costly war. And yet for some reason, Pte. Price was leading a small patrol to the east of Mons. » 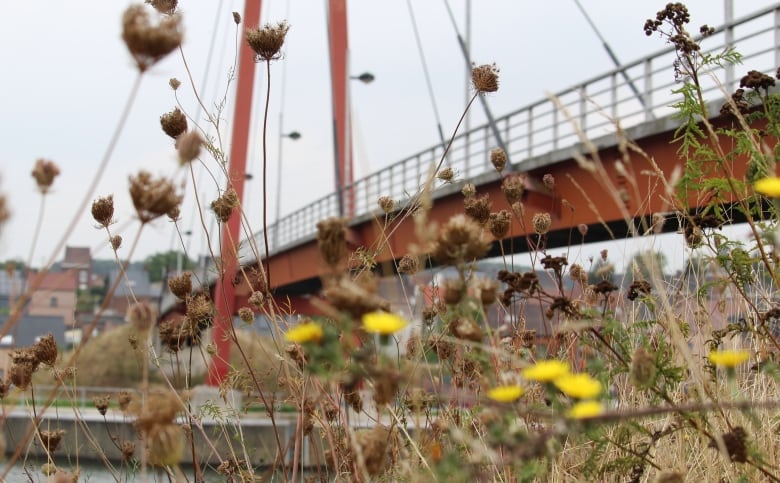 A view of the George Price Footbridge, which sits close to the spot where the Canadian private was believed to have been killed on Nov. 11, 1918. (Stephanie Jenzer/CBC)

For Price and a handful of other soldiers, the war went on. And there are a few versions of what exactly happened with Price that morning.

According to one account, by Pte. Art Goodmurphy, Price suggested they go sweep some buildings sitting across a narrow canal in Ville-sur-Haines to look for German soldiers.

Five soldiers walked across the small bridge and arrived at one home, kicking down a door to enter. While inside, German machine guns came alive, picking at the bricks of the house.

For these German soldiers, too, the war had not yet ended.

As the Canadians ventured back out, Price was shot by a sniper. On the inside his uniform, he was wearing a delicate flower knitted by his fiancée.

Art Goodmurphy recounts how Canadian Private George Lawrence Price was shot and died in his arms on Nov. 11, 1918 — the last soldier of the British Empire to be killed in action in WWI. (CBC archives) 2:22

« All of a sudden — BANG. One shot came from all the way up the street. Got hit right through the back and to the heart, » recalled Goodmurphy.

Various accounts mention a young woman who ran over and tried to help. They note that the lady of the house also tried to comfort Price.

But he went quickly: Price was dead — just a month shy of his 26th birthday.

By Goodmurphy’s telling, Price never knew an armistice was imminent. « He was just doing his job. »

A « Killed in Action » report filled out afterward records Price’s death at three minutes before the armistice took hold — and ahead of the church bells that echoed across Mons.

Other accounts — including an inscription on his old headstone, now housed at a museum in Mons — say it was just two minutes before: 10:58 a.m.

Learn more about how George Price left a lasting legacy in the region where he died:

This year’s Remembrance Day marks 100 years since the end of the First World War. In this weeks Dispatch, the CBC’s Nahlah Ayed travels to Belgium to bring us the story of Canadian Private George Price, the last British Empire soldier killed in the First World War. 9:55

In another version, Price had crossed the bridge to say hello to a young woman who had waved to him, perhaps for a kiss or a handshake.

« It’s interesting we focus on Price and what his death means, but we don’t, in fact, have a clear picture of how he died, » said Cook.

But on the other side of the ocean, what was clear was that the jubilance of that Monday was short-lived for Price’s family, who had joined countless others that morning, gathering at the local park to celebrate.

« The war was over and [the family were] having a real good time, » said Barkhouse. « They got home and found out Uncle George had been killed. Pretty darn rough. »

Price was eventually buried in the St. Symphorien Military Cemetery, which is also the resting place for several German soldiers.

Now, 100 Remembrance Days later, a new monument is being unveiled in Price’s honour in the city of Le Roeulx, across the canal from where he died, just under a footbridge also named after him. Barkhouse will be attending the ceremony with his granddaughter, Sylvia.

After a lifetime of telling the story, the pain lingers for Barkhouse, heir to the grief and love of the uncle he never knew. 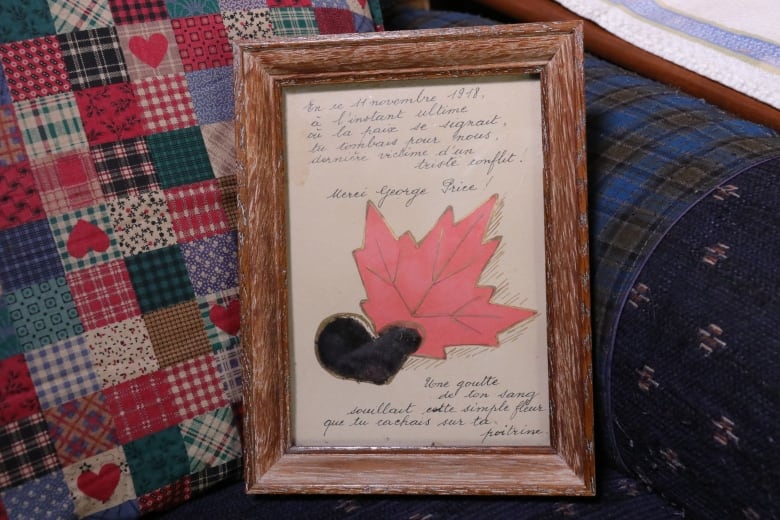 George Barkhouse, Price’s nephew and namesake, was given this frame during a trip to Belgium in 2014. It contained the knitted flower his uncle was wearing on the day of his death and a handwritten thank you note from a Belgian family. (Eric Woolliscroft/CBC)

On a trip to Belgium in 2014, Barkhouse also inherited an unexpected gift: That knitted flower worn by Price on the day he died. It’s still stained by his blood.

The flower was given to Barkhouse by a Belgian family, who had framed it and added these words:

« Today, Nov. 11, 1918, at the exact moment where the peace was signed, you fell for us. The last victim of a terrible conflict. Thank you George Price! »