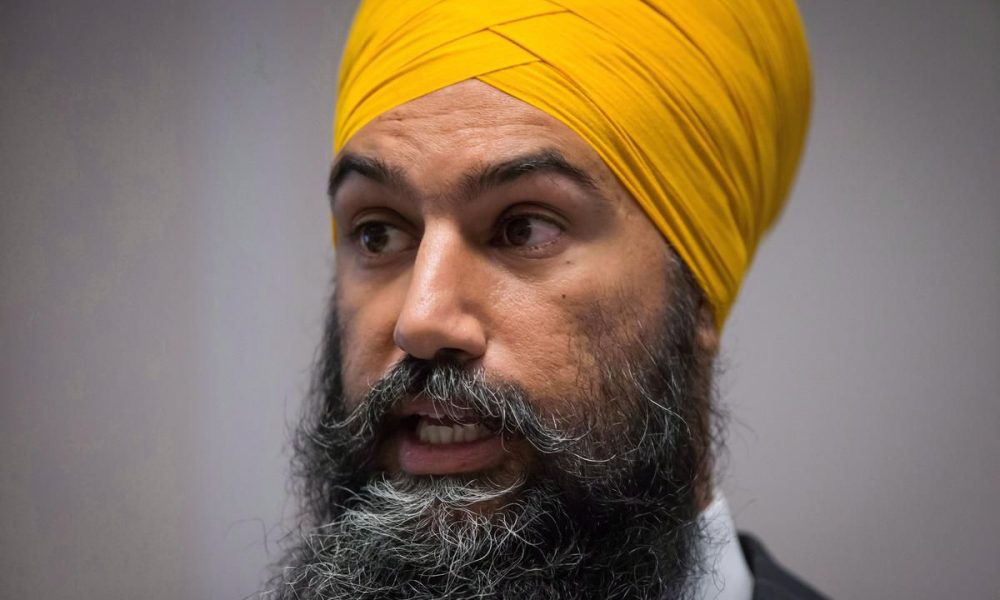 OTTAWA—With the Toronto Stock Exchange as his backdrop, NDP Leader Jagmeet Singh will trumpet a suite of proposals Friday to crack down on tax dodgers and stop the rich from hiding their money.

In an interview with the Star, Singh said an NDP government would do what the Liberal government hasn’t: ban the controversial “bearer shares” singled out in the massive Panama Papers leak as a way to hide stock ownership and obscure the movement of wealth.

Singh also underscored his commitment to close the stock option “loophole,” which allows corporate executives to avoid income taxes by receiving portions of their compensation in company shares instead of through their regular paycheques. The NDP is also promoting a bill in Parliament, sponsored by Victoria MP Murray Rankin, that strives to prevent companies from transferring money to other countries to avoid paying corporate taxes in Canada.

“Why is it that the ultra wealthy and the rich have access all these loopholes that mean they’re not actually paying their fair share? That’s a problem,” Singh said.

“Liberals maybe don’t have the conviction to follow through on these ideas because they might upset their friends,” he added, suggesting the Trudeau government is “too closely aligned with those folks who are the elite” to take action after three years in power.

“It’s definitely past due that we do something about it,” he said.

Singh’s proposal to ban bearer shares comes after years of international pressure to restrict their use as a shadowy instrument of global finance. Bearer shares are anonymous certificates of ownership. Just like cash, whoever holds the physical certificate owns the stock or share of a company it represents.

The Organization for Economic Cooperation and Development (OECD) has pressured governments around the world to eliminate bearer shares, arguing the anonymity they afford “makes them vulnerable to misuse.”

In May, the Trudeau government passed Bill C-25, a new law that banned the issuance of new bearer shares. That followed a statement from Finance Minister Bill Morneau in December 2017, in which Morneau and his provincial counterparts agreed “to pursue” amendments to laws and regulations that would eliminate bearer shares in Canada and replace them with more transparent alternatives. This is part of an effort to crack down on “money laundering, corruption and the financing of terrorist activities,” the joint statement said.

Morneau’s office directed queries about bearer shares to Industry Minister Navdeep Bains, whose spokespeople did not answer questions about the 2017 commitment on Thursday.

Singh, meanwhile, pointed to other countries like the Netherlands, where a deadline was imposed to switch bearer shares into more transparent forms of ownership. According to the OECD, dozens tax havens have done away with bearer shares since 2009, while financial accountability advocates like Publish What You Pay Canada and Transparency International have also called on Ottawa to restrict their use.

The NDP leader said Canada needs to eliminate them because of their attractiveness to criminals, as well as their potential as a means to hide money from the taxman.

“These are untraceable, they are unregistered. They are a massive problem, because we can’t actually then ensure there is proper taxation that applies from their use,” he said.

“(They’re) something that criminals will find useful, money launderers will find useful, and folks like the bad guys from action movies. You might recall Die Hard, where it was used — the bearer bonds. But it’s certainly not in the best interests of people, so we’re asking that to end once and for all.”

The use of bearer shares was also highlighted in the Panama Papers, a trove of leaked documents that cast a spotlight on tools used by the super-wealthy to dodge taxes and hide money. Former British prime minister David Cameron’s father, for example, started a fund for investors that kept 2 million bearer shares in a bank safe, with no record of who owned them. The papers also showed a Panamanian company owned by anonymous holders of bearer shares bought a condo from a Donald Trump-branded skyscraper in 1991.

The Canada Revenue Agency estimates Canadians with hidden offshore accounts evade up to $3 billion per year in taxes by hiding between $75.9 billion and $240.5 billion in tax havens.

With files from Marco Chown Oved