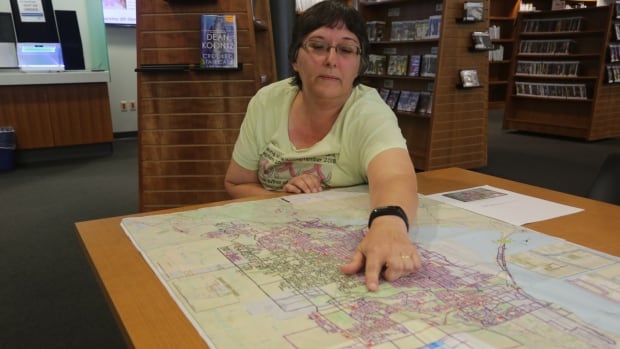 But if you ask, she’ll roll out a battered transit map of Hamilton covered in purple and black squiggles that trace just about every street in the city.

Over the past four years she’s walked them all — highways and private industrial roads excluded. All told, she’s covered an estimated 3,200 km.

Not bad for someone who says she’s not some « marathon chickie » and makes no claims of being an athlete.

« I’m just a frumpy housewife who decided to get off her couch and explore her city, » she says.

Getting out of the car and onto my feet gave me a chance to examine the city in a very special way.– Anita Joldersma

Joldersma already knows what you’re going to ask before you say it. Why?

For the 56-year-old the answer is simple; she wanted to see more of her neighbourhood, but when she started walking she had trouble tracking which streets she had travelled.

So she started marking them on a map. She admits to being « a little OCD » and said those lonely lines soon started bugging her. She became determined to finish the map.

« My husband says I’m stubborn. I call it determined, » she said with a laugh. 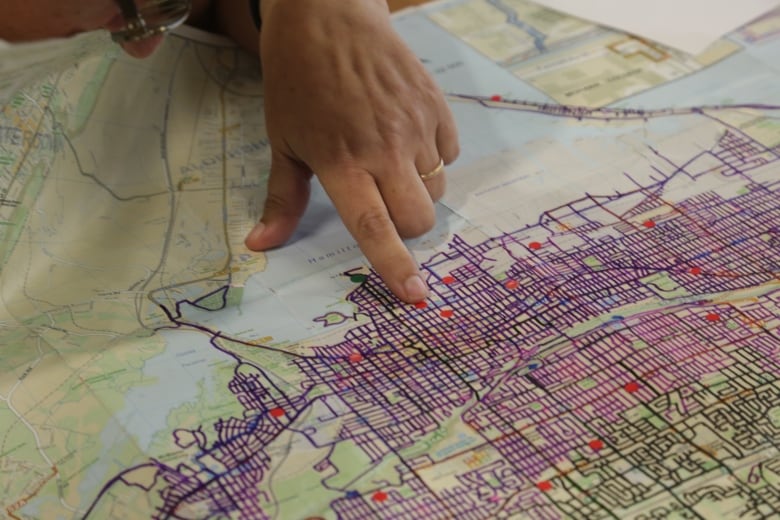 Joldersma kept track of the ground she covered by tracing the streets in purple and black permanent marker. (Dan Taekema/CBC)

Travelling with her own two feet didn’t come naturally to the mother of six who said before she started walking she was the type of person who considered a trip to the mailbox worthy of hopping in her car.

In fact, after her first-ever stroll she was tempted to throw in the towel.

« I hated it. I came back almost crying because I had worn the wrong shoes, I had blisters, I was thirsty and it was just terrible… and I had only walked around the block. »

Waking up a walker

Two days later she tried again, and as she huffed and puffed along Acadia Drive, she says a woman driving by told her to « keep it up. »

That was all the motivation she needed. The next morning, Joldersma says she woke up a walker.

Her journey covered all the streets within Hamilton’s historic city limits, before amalgamation it 2000.

It started on the Mountain before leading her through overgrown trails where she dodged poison ivy, into blinding snowstorms that froze her phone and along Barton Street the night after police taped off a section of the road to investigate a violent incident.

Joldersma said she never felt unsafe, but added walking past a crime scene the morning after and seeing the residents were just regular people taking their kids to school taught her not to stereotype.

While walking, she wore through a pair of shoes while meeting interesting characters and curious kids children who asked her about her mission. 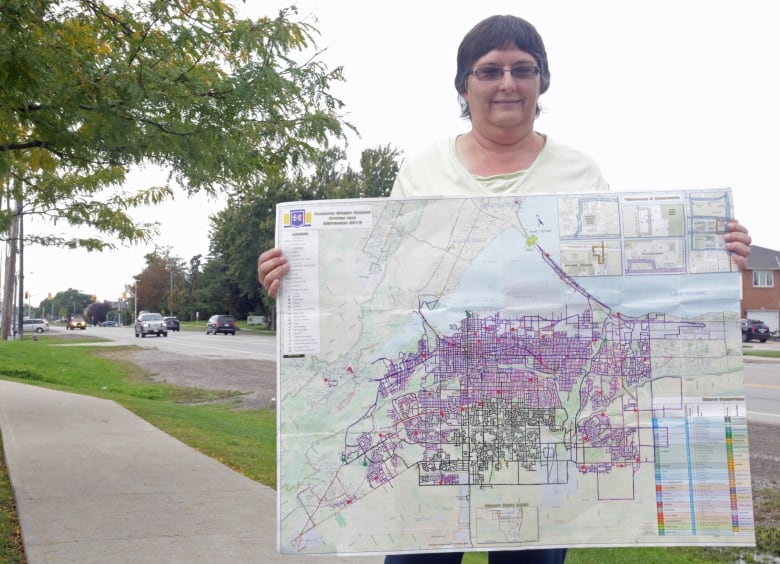 The 56-year-old plans to keep walking in Dundas, Ancaster and some parts of Stoney Creek. (Dan Taekema/CBC)

The effort was never about weight loss, but she burned a lot of calories along the way. That said, Joldersma did discover she « cannot out-walk my fork. »

She also learned a little bit about the city she calls home.

On September 29 Joldersma completed her four years of walking with a trip down Carrick Street along with Mayor Fred Eisenberger who just so happened to be politicking at the Tiger-Cat game nearby.

As she crossed a finish line made of colourful pennants strung around a parking sign she was hugged by friends and family.

« You can’t do this without it touching your heart, » she said. « Getting out of the car and onto my feet gave me a chance to examine the city in a very special way.

I feel like I belong to all of Hamilton now. »

After completing her project, Joldersma said she finds herself enjoying more stamina and walking to the store or the bank, trips she never would have considered before.

Confessions of a Streetwalker

The map may be filled in, but Joldersma isn’t finished. She plans to keep walking in Dundas, Ancaster and some parts of Stoney Creek.

She’s also working on a short story about her wanderings called Confessions of a Streetwalker — a suggestive title with pun fully intended.

Joldersma speaks fondly of her journey and what she learned along the way, but as she sketches out her next steps she stops.