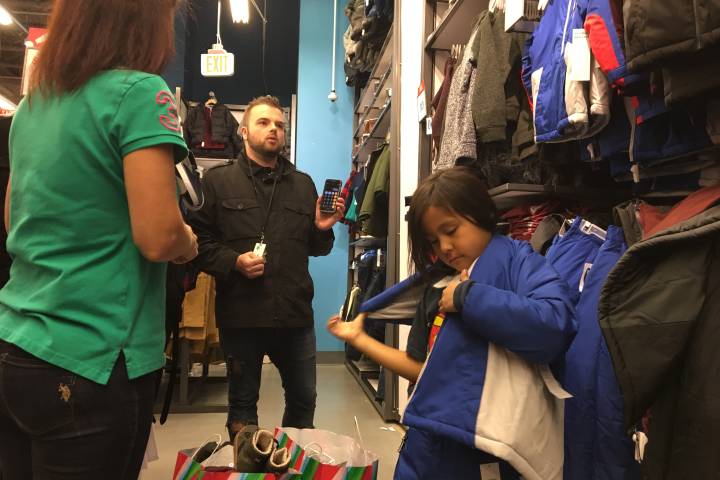 A group of children from four Edmonton inner-city schools went on a shopping spree this weekend — and learned some practical life lessons.

About 100 young shoppers, ages six to 17, descended on Old Navy in West Edmonton Mall on Sunday. They received $200 to spend through Rotary Clubs and community donations, with each amount spent matched by Old Navy itself.

“This gets really good clothing and apparel in the hands of some children who really need it before the Christmas and winter season really start,” said Patrick LaForge, a Rotary volunteer.

The effort is part of the Santa Clothes program, now in its third year in Edmonton. The Boys & Girls Club’s Big Brothers Big Sisters (BGCBigs) selects participants from families they feel would benefit most.

“This is, for many of them, the first time they’ve had a shopping experience that was just about them or even where they’re getting new clothes,” said Tannis Pearson, mentoring manager at BGCBigs. “It’s pretty impactful when they come to school Monday morning. The hallways of the school become a runway.”

Each young shopper is paired with a volunteer who helps pick their outfits — and teaches them valuable budgeting skills.

“They get some advice on what a budget is and what are the limits, so they go through — a coat cost this and boots cost that — and at the end of the day, they have to select something that’s under their limit,” LaForge said.

The program dates back to 1998, when it was first launched by Rotary Clubs in Las Vegas.