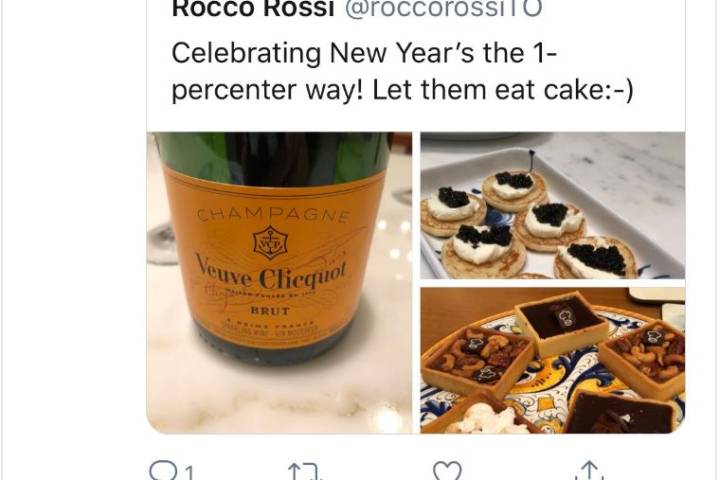 “It’s an awful comment about working people and letting them just suffer, while he is enjoying a $78.00 or whatever bottle of champagne, caviar and fancy little hor d’oeuvres. People struggle. And it’s real,” says Briana Broderick, president of the Kingston and District Labour Council.

This Tweet was originally posted by the President of the Ontario Chamber of Commerce, Rocco Rossi.

Last fall, Rossi and the Ontario Chamber of Commerce successfully lobbied the Ontario government to cancel a planned hike in the minimum wage, freezing it at $14 an hour.

“This is a very trying time for labour. It’s a hard time for working people – and it just shows the divide between the Chamber of Commerce, those business people who don’t really care about working people,” said Broderick.

Mr. Rossi apologized on New Year’s Day, taking down the post, saying it was insensitive and meant to be satirical. But for many the damage was already done. The criticism online has not let up.

One woman posting, “I hope you enjoy that New Year celebration that you paid for by robbing Ontario’s poor.”

Another said, “Fairness and equality are deep seeded Canadian values worth protecting from those who begrudge the less fortunate from having a small amount more.”

Broderick added, “‘Let them eat cake.’ Originally that meant, let them starve. And that is what Mary Antoinette said. So I think it was highly inappropriate. I think it was insensitive.”

The Greater Kingston Chamber of Commerce, who welcomed Rossi last fall to talk about the new trade deal between Canada, the U.S. and Mexico, said in a statement: “With respect to Rocco Rossi’s tweet on New Year’s Eve, this does not represent the views of the Greater Kingston Chamber of Commerce. As a progressive community leader, we work together with individuals and businesses to advance the interests of our business community as a whole.”

OPSEU has weighed in. Union president Smokey Thomas has called for the chamber’s CEO to resign. But so far, 56-year-old Rossi has provided no indication that he will step down as one of the leading voices of business in Ontario.