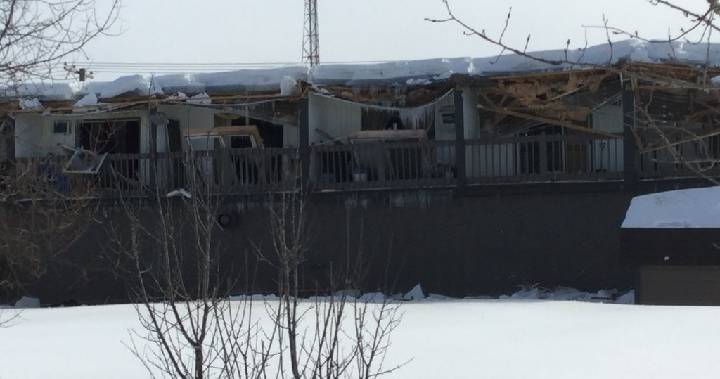 There have been several roof collapses across Quebec in recent days.

The most recent was in Saint-Jérôme, roughly 50 kilometres north of Montreal.

Firefighters were called to a two-storey building on La Salette Boulevard at around 10 p.m. on Saturday.

The mixed-use building houses a butcher shop on the ground floor and seven apartments on the second floor.

The residents made it out of the building before the arrival of emergency crews.

There were no reports of injury but the building will likely need to be torn down, according to Nicolas Stevi, chief of operations for the Saint-Jérôme fire department.

The Red Cross was assisting four of the building’s residents to find alternate accommodations, while two others sought help from family or friends.

WATCH: The biggest storm of the year so far has hit Quebec

On Friday, the roof a grocery store in the Québec City suburb of Lévis also partially collapsed, sending two people to hospital to be treated for minor injuries.

Then, on Saturday, an arena in Quebec City was evacuated as a preventative measure after a beam fell. In Trois-Rivières, the roof of a warehouse caved in.

A canine unit specializing in search-and-rescue operations was deployed Trois-Rivières to help search the debris. It was believed a person might have been inside, but officials later confirmed the building was empty.

The roof of a warehouse collapsed in Trois-Rivières on Saturday, Feb. 16, 2019. Courtesy TVAIt is believed heavy snow and rainfall in the past week may have contributed to the string of recent incidents.

On Sunday, however, the residents of Saint-Jérôme weren’t taking any chances. Global News spotted several people shoveling off their roofs.

St-Jérôme residents clearing snow from the roof of a building on Sunday, Feb. 17, 2019. Mike Armstrong/Global News

For its part, the Régie du bâtiment du Québec (RBQ) says that while our roofs are generally built to withstand the heavy snow of Quebec winters, it’s important to remain vigilant when snow accumulation is “exceptional or atypical.”

Signs to watch out for that could indicate stress on the structure include the following:

In case of multiple signs, the RBQ says the first thing to do is to evacuate the building and then take the necessary measures to have the snow removed from the roof.

While it’s possible to do the job yourself in some cases, the régie strongly recommends hiring qualified professionals to do it for you.

It’s a hazardous operation, the régie warns, “as much for the person who is up on the roof as for anyone who circulates around the house.”

It is also reminding residents to be aware of electrical wires and installations that could be in close proximity when clearing snow. 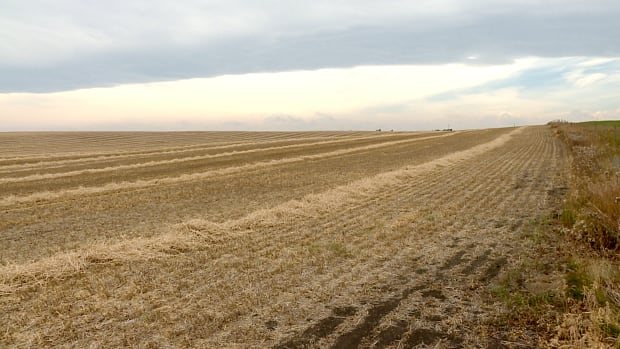 Farmers in Alberta are racing against the clock to harvest their crops after heavy rain and snow in September left fields too wet to work.

The wet weather delays followed a dry summer that already had farmers bracing for a hit to their yields.

Kevin Bender, who farms west of Red Deer and is the chair of the Alberta Wheat Commission, said his farm has been shut down for about three weeks, with only about a quarter of his acreage harvested.

« We had three or four snowstorms and cold weather … but we’ve been able to get back on canola last Sunday night, and trying to race the clock and get as much done as we can until the next precipitation hits us. »

Farmer Ian Chitwood of Airdrie said some parts of his property got upward of 30 centimetres of snow.

« We have not combined a single bushel yet this year, » he told Alberta@Noon on Friday.

And, the wet conditions mean crop quality was on the decline and expected to drop even further, the report said, with malt barley, oats and canola being graded below average.

John Guelly, the vice-chair of Alberta Canola who farms canola, malt barley and wheat in the Westlock area, said he’s experienced tough conditions in 2016 and 2017 as well but he expects this year to be even worse.

« It could be a lot of crop out over the winter unless we’re able to get some decent weather. And a little bit of precipitation right now really hurts because the days are so short, » Guelly said.

With files from Andrew Brown, Alberta@Noon.