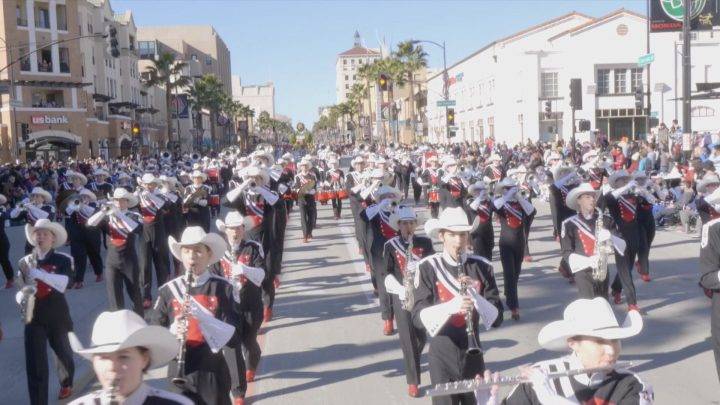 The Calgary Stampede Showband kicked off 2019 with a bang performing in the 130th annual Rose Parade on New Year’s Day in Pasadena, Cal.

Including Calgary staff and chaperones, 210 people flew down to the Golden State. Of that, 167 are band members and 16 are showriders.

“It’s one of a kind,” he said. “There’s nothing like what we were able to do today anywhere else in the world.”

While most bands were American, there were also groups from Sweden and Costa Rica. The Calgary Stampede Showband was the only Canadian band at this year’s parade — a source of pride for Hancock as they represented the country.

“You turn Colorado Boulevard and you really get yourself in the sunlight,” he said. “After you turn the Boulevard, it’s really straight for about an hour and a half going down the street.”

In their two-hour, nonstop, about nine-kilometre march, more than 15,000 steps were clocked on Hancock’s FitBit — a workout that the group tried to mimic in Calgary rehearsals.

“It’s a ton of exercise but these kids have prepared for months to get ready — some of them, years,” Hancock said.

Some audience members camped out for nearly 24 hours to get a good spot in the stands along the route.

“[The crowd] was so amazing,” Hancock said. “They were very excited, very energetic. There were a lot of people yelling ‘Go Canada.’ There were a couple folks from home, some happy Canadians, but also a lot of very happy and supportive people from all over the world that were cheering the band on.”

“There was a lot of yelling ‘Happy New Year’ from the crowd.”