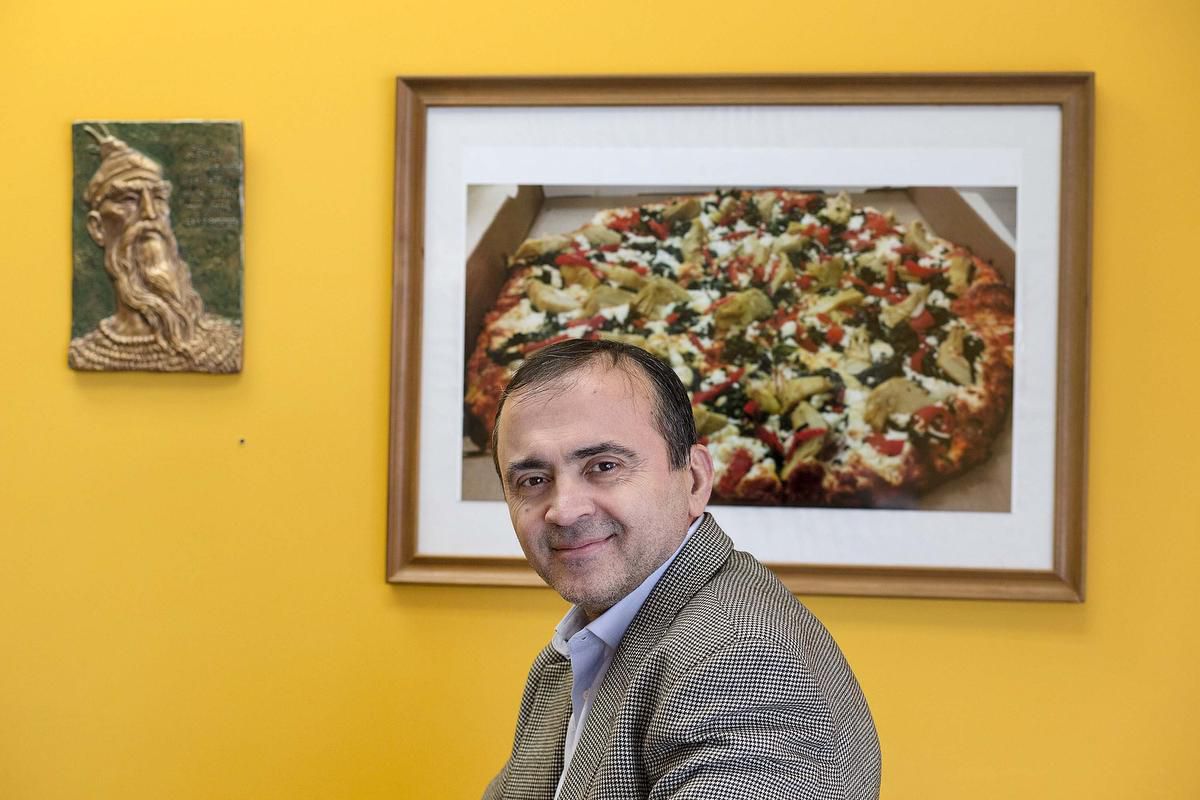 Perparim Kapllani opens his Toronto pizza shop every morning at 11 a.m. and closes it every night 12 hours later. He’s been doing it seven days a week for the past decade, not counting brief vacations.

There’s nothing unusual about immigrants working hard. But Kapllani, who arrived from Albania in 2000, juggles a second job at the same time in a rather striking way.

Between serving customers and making pizzas, Kapllani squeezes into a backroom office no bigger than a broom closet. He sits at a tiny desk and shifts his focus “like a rabbit” between two screens: on one he can see when the next customer walks in; on the other, connected to his desktop, he writes the next sentence of his novel.

“There are little moments when I can write something,” Kapllani says.

Since opening his west-end shop in 2008, Kapllani has stolen enough little moments to write a play, a collection of short stories, and two novels. His most recent novel, The Thin Line, was published in November by Mawenzi House.

Were it not for the pizza shop, “I might publish a novel every year,” Kapllani quips.

He comes from the Balkans, a peninsula in southeastern Europe that has been carved up by empires and regional powers for centuries. The 1998-99 conflict between Serbia, a largely Orthodox Christian state, and Kosovo’s ethnic Albanian Muslims is the backdrop to Kapllani’s latest work.

It’s based on a true story about a 10-year-old boy in Kosovo, the sole survivor of a massacre by Serb forces in April 1999. The boy watched as 20 ethnic Albanian women and children were shot to death in a house, including his mother and three sisters.

The boy was wounded, but survived by playing dead. He eventually came to Canada with his father as a refugee.

His horrific story is well documented — he testified years later at a United Nations tribunal on war crimes in the former Yugoslavia. But Kapllani asked that the survivor’s name not be published because his novel fictionalizes his experiences.

“The ghosts of the loved ones, of the dead, they follow you — they chase you. What are you going to do?”

Kapllani’s book was edited by M.G. Vassanji, a novelist who twice won the Giller Prize. Vassanji says it reflects the traumatic experiences refugees bring to Canada, and the Canadian values that help most overcome feelings of revenge.

“You cannot forget the fact that you lost your mother and three sisters right in front of you, but you can put the past to rest and you can start again,” Vassanji says in an interview.

“It says something about the quality of our society that you can do that,” he adds, “that you’re allowed to be who you are and are given the space to grow and to find yourself.”

Kapllani wrote about the boy when he worked as a journalist with Albania’s biggest newspaper, Shekulli, in the capital Tirana. The boy was one of an estimated 900,000 Kosovar Albanians expelled by Serb forces, and Kapllani met him while he recovered in a military hospital. He identified with the boy’s pain.

Kapllani grew up in Elbasan, a city in the middle of what at the time was communist Albania. When he was 10, his father was found dead in the street with a fractured skull, after years of struggling with mental health issues. The circumstances of his death were never determined.

The municipality found Kapllani’s family a room in a building known as “the fish palace,” because of the fish shop on the ground floor.

“There were 28 families living there and five washrooms outside the building,” he recalls. “It was a nightmare.”

With the help of a locally connected man, Kapllani entered a military school at the age of 14 and graduated as an artillery officer. He became a journalist with the department of defence and, when the communist system collapsed in the early 1990s, got a job at Shekulli.

He covered crime, and once went into hiding after exposing local mobsters laundering money in construction projects. He also witnessed the terrifying brutality of the Kosovo war.

“To myself I said, ‘How can this happen in the middle of Europe, just because they have a different religion or nationality?’” Kapllani says.

He came to Canada as a landed immigrant with his wife and son. His wife is a chemical engineer who works for a company that produces medication; his son graduated last year from the University of Toronto with a degree in industrial engineering.

After working in pizza shops for years, and getting entrepreneurial tips from the non-profit Toronto Business Development Centre, Kapllani opened his own place on Lansdowne Ave. near Dundas St. W.

A small man with an easy smile, he says he learned quickly that in Canada, ancient ethnic grievances find no foothold.

“My son, his best friends are Serbians; two Serbian brothers. They came to my house one day — a little boy with a (T-shirt) that said, ‘Proud to be Serbian.’ I said, ‘What! Who is this guy?’” Kapllani says, laughing.

“Canada is a miniworld,” he adds. “When everybody comes from somewhere else, diversity becomes the culture, not ethnic or religious nationalism.”

He’ll continue to explore those themes in literature, right after he wipes the flour from his hands and serves up his “deluxe” pizza, with pepperoni, mushrooms and green peppers.