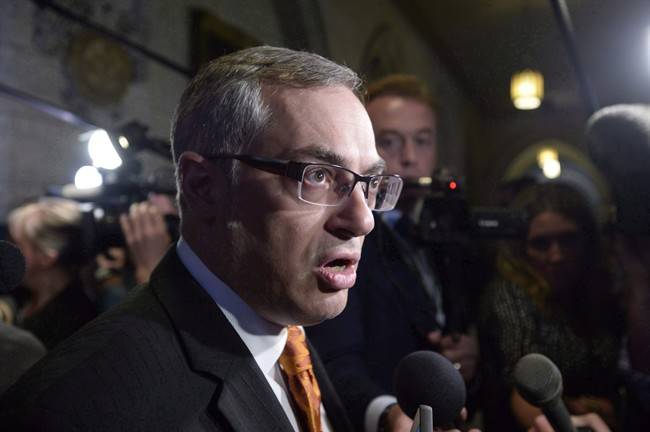 Cases such as the transfer of Tori Stafford‘s killer out of prison and into an aboriginal healing lodge risk eroding public faith in the justice system and may lead to people taking matters into their own hands.

That’s what Conservative justice critic Tony Clement told reporters Wednesday morning in Ottawa. He said the Liberals should step in amid the news that Terri-Lynne McClintic, one of the two people convicted in the 2009 murder of eight-year-old Victoria ‘Tori’ Stafford, was being moved from a maximum-security prison to an aboriginal healing lodge.

That case, and a decision by Veterans Affairs Canada officials to let a convicted murderer receive veterans benefits despite never having served, are examples of cases that Clement says the government is failing to take seriously.

“This is a problem that is going to erode a feeling in our country that justice is being served and when that erodes, people take matters into their own hands,” he said when asked about the case while arriving on Parliament Hill.

“I’m not sanctioning that, I’m not calling for that. I’m merely saying when justice is not done, when people see the system is not serving the victims and their families, people get very upset and that’s not good for our society.”

When asked to clarify specifically what he meant, Clement said, “vigilantism.”

“It actually promotes vigilantism in our society.”

WATCH BELOW: McClintic wraps up testimony at Rafferty trial

Both are serving life sentences with no eligibility for parole for 25 years.

McClintic also pleaded guilty to assaulting a fellow inmate in 2012.

According to the Correctional Service Canada website, the Okimaw Ohci Healing Lodge where McClintic has been moved “was built with the intention of housing incarcerated Aboriginal women.”

It can hold about 60 people in its open campus facility and is located on the Nekaneet First Nation.

What is not clear at this time is whether McClintic is aboriginal or whether the lodge is open to convicts who are not aboriginal.

Global News has requested clarification from Correctional Services Canada about what the criteria are for moving an inmate there.

In an interview with CTV’s Power Play on Tuesday night, Public Safety Minister Ralph Goodale was also asked about the case.

Specifically, he was asked why McClintic is being moved now after serving just eight years in maximum-security prison when she is not due to be eligible for parole for years.

“The prison management officials have determined this is the best way to both rectify her bad practices in the past and also to keep the public safe,” he said.

Clement criticized the transfer on Twitter as bringing McClintic to a place with “no walls, but cooking and workshops.”

The killer McClintic lured 8 year old Tori Stafford to a car. Tori was abducted, then assaulted horrifically by McClintic’s boyfriend. She then beat Tori to death. And for this she’s been transferred to minimum security; no walls, but cooking and workshops. This is outrageous

He also told reporters the decision was “swerving away from the sentence” handed down by the judge.

“The fact of the matter is this so-called punishment does not fit the crime,” he said.

“If she’s taking undue advantage of a program that is not meant for her, that’s not right.”

Parkdale tenants granted stay of eviction by Landlord and Tenant Board